Did David Cameron's "tough talking," or Angela Merkel's "charm" win the day in London? Has the gap between Britain and the EU been bridged, or further widened, after their bilateral meeting? 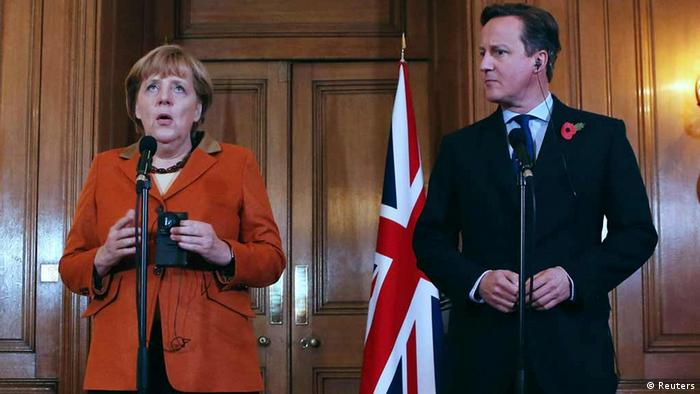 Mario Draghi, head of the European Central Bank (ECB) announced shortly beforehand that the eurozone economy would remain weak and admitted that even the German economy is slowing down significantly. 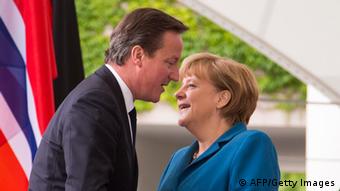 The diplomatic language was careful, but how much did they concede over dinner?

With entrenched positions on both sides and no official statements expected, it was difficult to see how the dinner could help.

Carsten Volkery, UK correspondent for Spiegel Online, told DW that Merkel's promised charm offensive had "vanished in a puff of smoke", and that not very much had changed outwardly in either leader's position.

"But that was never going to happen anyway," he added, "these bilateral talks pre summit are good for understanding the work that needs to go on at the summit, for seeing where there might be room for compromise and how that might work when you get to the official meeting."

In the lead up to the Downing Street dinner, the newspapers didn't seem very concerned with the meeting of the German and British leaders either, saturated as they were with news of President Obama's win in the US elections. 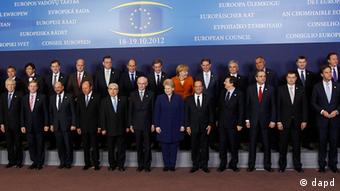 Odd one out? Britain, like David Cameron in this photo, is on the periphery of the EU

But where there was interest, the rhetoric was completely at odds. David Cameron, facing accusations that he can't control his party, perhaps felt he had to promise "tough talking" at the meeting, in a bid to appease his party's euroskeptic majority.

Merkel, meanwhile, keen to keep everyone in Europe, even the British, on side, as she approaches EU budget talks, promised charm. Perhaps she could afford to be charming, knowing as she does, that effectively, the British leader was in a "lose-lose situation" as Carsten Volkery put it.

Cameron might have promised toughness, but he is outnumbered in Europe, and losing popularity in some quarters at home.

"I think what Britain wants," said Volkery, "is to return to an EU of 20 years ago, and keep it in that state, the so called 'cherry picking' approach, where they have access to the free market, and can implement some EU laws, but not others."

But in today's world, that is not possible, and Cameron knows it. He talks about being more like Norway and Switzerland, but he knows deep down, that they have no power to decide on the laws they then have to implement in order to have access to the free market. Withdrawing further from the EU would mean the UK would have less power and would be more isolated.

Before the dinner, Cameron had already pronounced the EU's decision to increase the seven year budget as "completely ludicrous". He pledged to fight for British taxpayers and for taxpayers right across Europe to cut the budget or "at worst" freeze it. 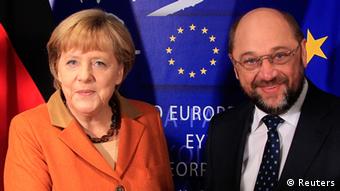 Before dinner in Downing Street, Angela Merkel stopped off at the European Parliament and met EU Parliament President Martin Schulz

He proposed that the EU make cuts to its own administrative budgets, rather than expecting cuts to be made solely across member states.

"We cut ministers pay, froze it for a parliament, reduced the size of the civil service, slashed the number of quangos, cut billions out of central budgets. We are not doing that in Britain to see the European Union do nothing similar itself," he said.

"Merkel in effect agrees with most of that analysis" says Volkery, "but she is also realistic, and realizes that things have changed since 2010, the euro crisis has got worse and more people are asking for money, it's just not possible to remain at the levels of 2010."

Merkel is, of course, also keen to defend her own national interests, but she told journalists on Wednesday evening that ultimatums were unhelpful:

"If you want to bring together the interests of all 27 European Union member states it's mostly not helpful to start with ultimatums," she said, after being asked about veiled threats made by Poland's European Commissioner, Janusz Lewandovski.

Fabrizio Fiorilli, Lewandowski's spokesperson, told DW, "the ray of hope is that everyone will realize that if no new budget emerges it will harm each and every one of us."

But despite these pronouncements, many in the EU appear irritated with Britain's stance, and will be watching carefully for any sign in a change in that attitude. 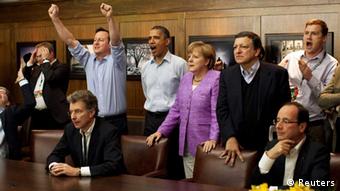 Was David Cameron so jubilant after the dinner with Angela Merkel?

President of the European parliament, Martin Schulz made it clear that he felt Britain had to make a decision to be for or against Europe, saying: "For Great Britain the doors in Europe are wide open. But it is the countries' decision to go through them" making it clear that this is sink or swim time for Britain.

All eyes are now on the EU summit on November 22, where leaders are set to reach a deal on the budget.

Carsten Volkery of Spiegel says there are two potential scenarios for the talks: Either "Britain decides to veto again, the second veto in a year would send a very strong message, or they realize they have to compromise to stay within the EU."

Which way his performance will go, only Cameron and his advisors know, but the Germans hope that their quiet dinner will have helped not hindered the situation.

They'd be "sorry" to see Britain leave, says Volkery, but at the end of the day "you have to do a cost benefit analysis," and if they are constantly vetoing and refusing to vote then there is not much use to them being there.

British Prime Minister David Cameron is under increasing pressure to act tough on Europe. But there is concern that Britain's stance could be damaging, both for the UK and for the rest of the EU. (03.11.2012)

At a summit of eurozone leaders, a compromise has been reached on the creation of the new post of banking supervisor. Germany and France began the day with completely different aims, and an agreement didn't seem likely. (18.10.2012)