Britain may be yet to leave the European Union, but the term for its departure - "Brexit" - has earned a place in the Oxford English Dictionary. "You-tuber" and "Glam-ma" are also among the latest entries. 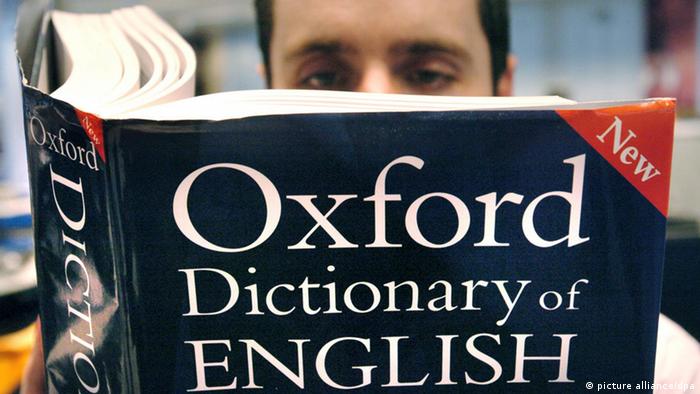 How a dictionary aims to expand standardized variants of German

Germans may not believe that the versions of their language spoken in Namibia, Mexico and Romania are standards. The creator of an expanded German dictionary says they are - and he explains why. (08.12.2016)

Oxford University Press confirmed on Thursday that "Brexit" is among this year's additions to the Oxford English Dictionary (OED). The noun "Brexit" is defined as "the (proposed) withdrawal of the United Kingdom from the European Union, and the political process associated with it. Sometimes used specifically with reference to the referendum held in the UK on 23 June 2016, in which a majority of voters favoured withdrawal from the EU."

The word has rapidly entered common usage since Britain voted to leave the 28-nation EU in the June 23 referendum. Article 50 - the formal process of the UK's departure - is expected to be triggered by the end of March 2017. However, Secretary of State for Exiting the European Union, David Davis, said on Wednesday that the UK still won't have a Brexit plan until February.

Glam-mas get their freak on

Another EU-related word to enter the OED is Greece's potential exit from the EU's single currency - Grexit.

Social media made its mark on the dictionary too, with "YouTuber" - a producer of material for the video-sharing website - also landing a spot. Other additions include "glam-ma," a glamorous grandmother, and "get your freak on," a term for exuberant sex or dancing which first gained prominence in 2001 following the release of the Missy Elliott song of the same title.

"Verklempt" - which derives from the German "verklemmt" meaning uptight or inhibited - has also entered the OED as an adjective meaning overwhelmed by emotion.

The OED traces the history, meaning and pronunciation of more than 829,000 words and aspires to be the most complete record of the English language ever assembled.