Breonna Taylor's family: We have 'no faith' in legal system 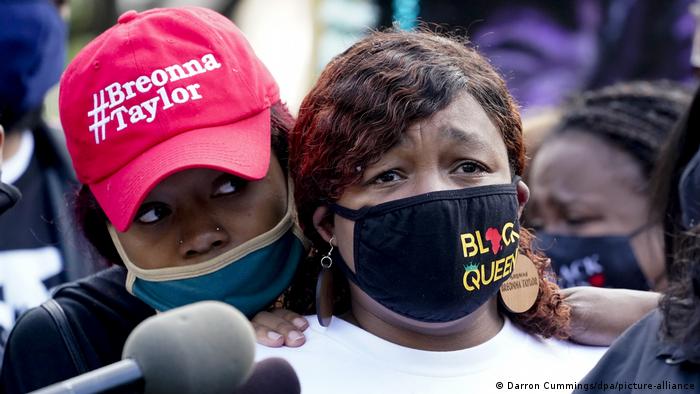 The family of Breonna Taylor spoke in front of a crowd in Louisville, Kentucky on Friday and condemned the US state's attorney general for failing to convict three police officers Wednesday for Taylor's death during a drug raid in March.

"I was reassured Wednesday of why I have no faith in the legal system, in the police, in the laws that are not made to protect us Black and brown people," Taylor's aunt Bianca Austin read in a statement written by Taylor's mother, Tamika Palmer.

Read more: US: Police officer charged over Breonna Taylor raid — but not for her death

The family's attorney, Ben Crump, also asked the prosecutor in the case to release transcripts of the grand jury proceedings, to demonstrate if anyone spoke on Taylor's behalf. 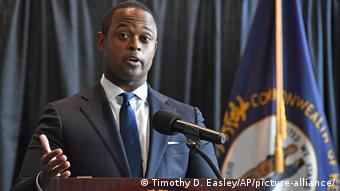 Palmer's statement accused Cameron of being "too inexperienced to deal with a job of this caliber."

Taylor, a Black medical worker in the southern US city, was shot multiple times by police officers after her boyfriend — allegedly fearing an intruder — shot at them when they entered the home with a warrant unannounced. The person the officers were looking for did not live at the house and no drugs were found.

The case and lack of conviction has sparked protests in cities across the US, where unrest over a national debate on racial justice continues.

Activists with movements like Black Lives Matter say too many Black Americans are killed by police officers who aren't punished for their actions.

"But I am not angry for the reasons that you would like me to be, but angry because our Black women keep dying at the hands of police officers."

Louisville police on Friday reported at least 24 arrests following a second night of unrest. Activists said the protests will continue until the officers have been charged.

Police said those arrested were charged with unlawful assembly, failure to disperse, and rioting.

In the violent demonstrations in Louisville immediately after the grand jury decision on Wednesday, two police officers were shot, and are expected to recover.

The man charged with shooting the officers has pled not guilty. His attorney said the area where the shootings occoured was a "war zone," adding it was difficult to "pinpoint" if his client fired the shots.

A prosecutor said a gun was recovered from Johnson and there are video and witness accounts of the shooting.