The Christmas market at Berlin's Breitscheidplatz is centrally located next to the Memorial Church, in the middle of shopping avenues. Three years ago it acquired sad notoriety when it became the target of an attack. 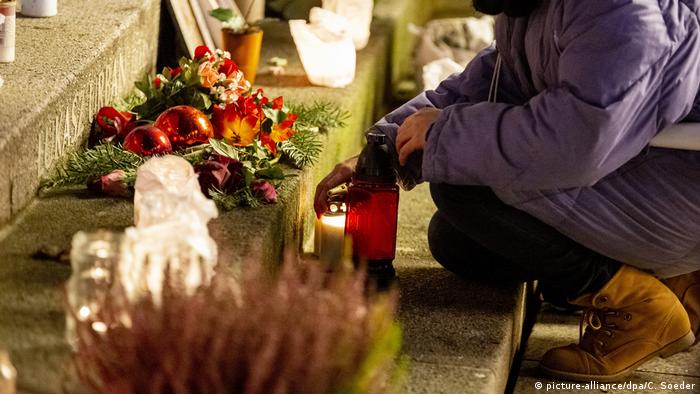 The fragrance of mulled wine and marzipan, gingerbread and bratwurst fills the air. Chains of holiday lights sway gently in the wind, a meter-high wooden Christmas pyramid turns to the sounds of classics like "Jingle Bells" or "I'm dreaming of a white Christmas". A Christmas market in the middle of the city, set up all around the "Gedächtniskirche" or Kaiser Wilhelm Memorial Church. And yet it is a little world all of its own made up of wooden shacks and more than 50 cozy huts where handicrafts are on offer alongside an infinite number of delicacies: roast chestnuts, Greek festive cookies, kale, crispy potato chips, Kaiserschmarrn (an Austrian pancake specialty), Bohemian "tree" cake, raclette cheese or roasted almonds.

Is it all an idyll?

Hundreds of golden and red baubles adorn the large Christmas tree right in front of the Memorial Church, silver and golden packages illuminated by energy-saving LED lamps are stacked around his base, while Santa Claus helps small children get started on the mini Ferris wheel, and hot chocolate is available to warm them up and there's mulled wine for the grown-ups too. 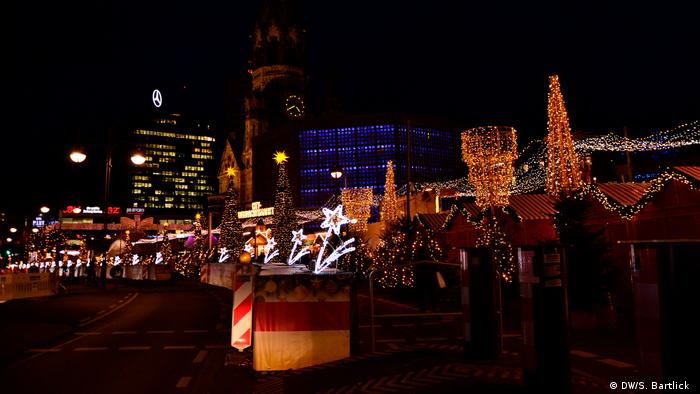 Nobody's surprised by the police officers on patrol. Or about the barriers: sand-filled steel baskets, concrete bollards weighing tons that cordon off the Christmas market from the adjacent roads. "It's not much different than at home," says a visitor from Hamburg. And, she adds, "it's actually a shame that cityscapes are being changed in this way. But that's just the way it is." Does she know that the cost-intensive security at German Christmas markets is the result of an attack that took place three years ago right here in the middle of Berlin? "Yes, something to do with an SUV," the woman in her mid-fifties says. And her husband nods.

Terror and how to respond to it

When the name Anis Amri is mentioned, both of them immediately remember what actually happened — a terrible tragedy: On December 19, 2016, the Islamist terrorist crashed into this Christmas market with a 40-ton truck, killing twelve people and injuring more than 70, some of them seriously.

After the attack, there was much discussion about freedom and how it must not be allowed to be taken away. But at the same time nobody wanted Christmas markets without a security concept — especially not here. Martin Blume is convinced that the market at Breitscheidplatz is the most secure in the world today. Sitting at the counter of his "Schlemmerkate" food stall, enjoying a late lunch, he remembers that fateful evening three years ago exactly. It happened right next door, he says. The impact, the blood, the horror! 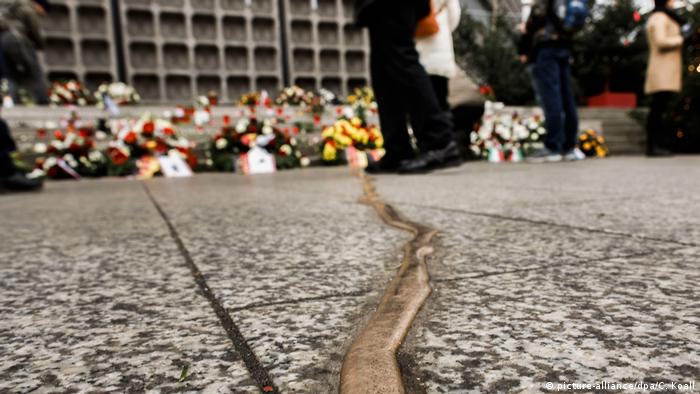 Next door, on the steps up to the memorial church, there are flowers and memorial lights flickering. Again and again, passers-by stop, visibly moved as they read the names of the victims engraved on the steps and look thoughtfully at the photos that their relatives have placed here. A band of bronze winds its way down the steps from the sea of flowers and gets lost in the granite slabs of the wide sidewalk. It represents the people who were snatched from life here as well as the rift that is tearing through German society: cosmopolitanism on one hand, xenophobia on the other.

The need to carry on — but differently

"Somehow life had to go on," says Martin Blume. Several traumatized employees quit his business, and yet Martin never considered giving it up. His father co-founded the Christmas market at Breitscheidplatz 35 years ago, he himself grew up with this market, experienced how it changed, grew bigger and bigger. And ever more beautiful, according to Blume.

He has long since taken over the "Schlemmerkate" from his father. The three wooden huts are lined up in a row and the light bulbs brightly illuminate the area, the air is filled with the smell is of mulled wine made with cinnamon, cloves and oranges, while sausages sizzle on a large grill, and employees with plaid aprons and cheerful pointed hats serve the house specialty: a fried mushroom dish.

Popular with young and old

The organizers of the market (AG City and the Schaustellerverband Berlin) expect around one million visitors this year. The truck attack has not dampened the popularity of the market; indeed more people are coming than before, according to Martin Blume. Berliners who want to show solidarity and support. And tourists from all over the world who are eager to dive into a different realm hidden behind the barriers between Budapester Strasse and Tauentzien and find a very special kind of contemplation in addition to traditional entertainment and beautiful Christmas tree decorations.