The lower house of Congress in Brazil has voted to strip former speaker Cunha of his seat and ban him from politics for eight years for lying about Swiss bank accounts. Cunha had engineered Rousseff's impeachment. 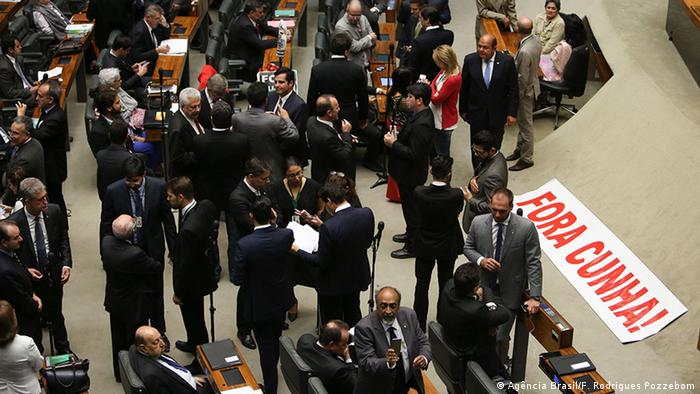 The lower house voted 450-10 to expel Eduardo Cunha, who has been charged with corruption by the Supreme Court. He has lost his parliamentary prerogatives and faces possible arrest.

The issue voted on by the Chamber of Deputies on Monday night was whether Cunha lied about having secret banking accounts in Switzerland. An ethics committee report read out to the chamber said the existence of his accounts and assets abroad was fully proven.

Cunha has been considered the architect behind the impeachment of former President Dilma Roussef.

Cunha, who was in his fourth term as a lawmaker, claimed the Swiss accounts belonged to a trust. He denied the charges: "I did not lie. Where is the proof? Where are the account numbers?" Cunha asked his peers. 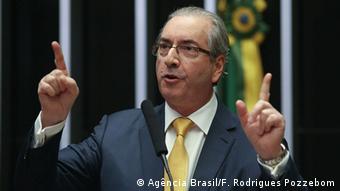 He has been a key ally of new President Michel Temer, who had been Rousseff's vice president. But after the vote he accused Temer's administration of joining in the effort to punish him for Rousseff's removal.

"This was a political process because I kicked off the impeachment proceedings. They wanted a trophy," he said at a news conference. "The current administration adopted the agenda of removing me from office," he said, adding that he planned to publish a book telling about the dealings that led to the impeachment of Rousseff.

Cunha has also been charged by the Supreme Court for allegedly taking a $5 million (4.45 million-euro) bribe on a drill ship contract for the state-run oil company Petrobras.

Cunha is the only sitting Brazilian lawmaker to face trial so far in the massive bribery investigation focused on Petrobras and other state-run enterprises where engineering companies siphoned off funds from overpriced contracts to pay bribes to executives and kickbacks to politicians in Rousseff's governing coalition.

About 60 percent of the 513 lawmakers in Brazil's lower house are under investigation for various allegations, according to watchdog group Transparency Brazil.

Brazil's Rousseff vows to fight on after impeachment

Ousted President Dilma Rousseff has promised to provide a strong opposition to Brazil's new center-right government. Her lawyers have already launched an appeal against her removal from office. (03.09.2016)

Tens of thousands have protested in the country to support Dilma Rousseff, who was sacked from the president's post on corruption charges. Her supporters have rejected the new President Michel Temer's "coup." (05.09.2016)