Thousands of anti-austerity protesters have marched on the state legislature in Rio de Janeiro, demanding the state governor to resign. Police fired tear gas and stun grenades in an effort to disperse the crowds. 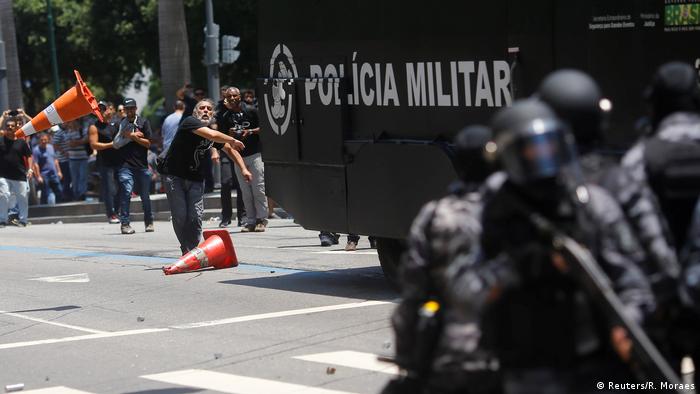 More than 2,000 demonstrators, among them teachers and police officers, faced off against elite Shock Battalion police on Wednesday.

Crowds were heard chanting for the resignation of Rio state Governor Luiz Fernando Pezao as they marched with banners, emblazoned with slogans such as "Public servants won't pay for the crisis!" Faced with an almost empty public treasury, Pezao is pushing through extensive budget cuts.

No help from federal government

Among the discussed austerity measures is an increase in the 11 percent withholdings from public servants' pensions to 14 percent. An increase of as much as 30 percent has previously been considered.

Rio de Janeiro's state government, which has barely enough money to pay many public employees or keep hospitals functioning, could also increase transport and utilities costs, as well as cutting subsidies for the poor.

Brazil's federal government has refused to bail the state out, however, over fears that others could be motivated to ask for help.

As protests escalated on Wednesday, a handful of protesters threw stones at the ranks of police who were protected by shields, but officers were forced to retreat from two metal barriers protecting the legislature steps when a group of demonstrators managed to break down the first fence.

Police tried unsuccessfully for more than an hour to disperse the growing number of protesters in the avenue outside the legislature, firing dozens of stun grenades and tear gas canisters.

Police reinforcements arrived shortly after - first a water cannon truck, then around 20 riot police on horseback. The water cannon was also brought into action, prompting chants of "cowards!"

Each time police force died down, however, the crowd reconvened on the legislature. According to AFP at least three people injured, including one who appeared to receive CPR.

More people have been killed in Brazil this year than in the Syrian conflict, an anti-violence watchdog reported. Police left more than 3,300 people dead in 2015, or roughly nine a day. (29.10.2016)