Visitors to Braunschweig in Lower Saxony can expect a seemingly seamless blend of tradition and modernity in the form of elaborate medieval architecture and thriving science and industrial centers. 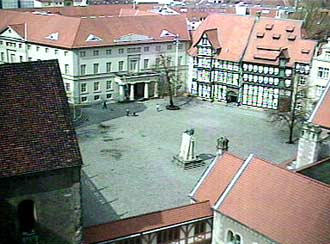 Braunschweig is known for its historic buildings

Braunschweig's origin dates back to the Middle Ages. It was first mentioned in a document of 1031 as "Bruno's Wiek" or Brunesguik.

Legend has it that the brothers Bruno and Dankward, both Dukes of Saxony, started building the "Villa Brunesguik (Brunsweik) on a site of a former Saxon village which had supposedly been laid waste by Emperor Charlemagne. Duke Bruno founded the "Weik" (a resting place for traveling merchants) on the right bank of the Oker River.

The city was located at the junction of major medieval trade routes and thanks to the Oker river, its water routes stretched to the City of Bremen as well to the North Sea.

A member of the Hanseatic League, Braunschweig was also the main base for Saxon merchants. It enjoyed major trade ties with the important cities of northern Europe. 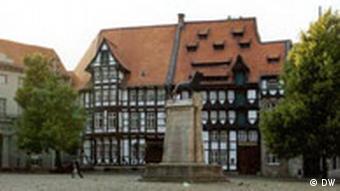 Today a lion statue, which is also the city’s emblem, stands at the ‘Burgplatz’ in the heart of the city. It symbolizes impressive strength and secular as well as ecclesiastical power.

The city of about 250,000 residents is situated about 60 kilometers east of the capital of Hanover in the state of Lower Saxony. The cityscape is still largely dictated by its earlier mediaeval structure. However, signs of modernity are also visible, such as the recent addition of attractive glass-roofed shopping passages and a pedestrian zone at the traditional marketplace.

Traces of the past can be seen in the Dankwarderode Castle, built in the Romanesque style, surrounded by several half-timbered houses that survived allied bombings in World War Two. Before the war Braunschweig had the largest homogeneous group of half-timbered buildings in Germany.

Other historic gems include the medieval Burgplatz with the 12th century Romanesque cathedral of St. Blasius and the Burg Dankwarderode, a castle containing a collection of medieval art treasures and precious reliquaries that is unparalleled in Lower Saxony. 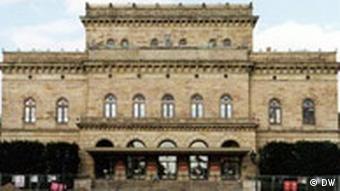 In 1829, the State Theater of Braunschweig, now more than 300 years old, hosted the premiere of a true masterpiece of German literature: the first part of Goethe’s "Faust." Before that in 1772, Gotthold Ephraim Lessing’s tragedy "Emilia Galotti" opened in the same theater. The theater today focuses on four main areas covering music, drama and ballet and also manages the state orchestra and the children’s and young people’s theater.

Home to science and metal works

Even the Federal Ministry of Consumer Protection, Food and Agriculture and the federal government research institute responsible for supervision of the aviation industry, have their headquarters here. 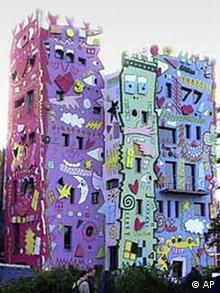 The Rizzi-House was designed by US pop artist James Rizzi

The city is also a leading German market for sugar products and is famous for its sausages, asparagus, and gingerbread. Away from its famed goodies, Braunschweig boasts a rail network and an airport and its chief industry centers around metal works. Machinery, motor vehicles, office and calculating machines, and pianos are manufactured here. Most recently, publishing and electronics have also emerged as forces to reckon in the city's economy.

But, the city's industrious image is also tarnished by a stain.

Braunschweig achieved inglorious fame by making Adolf Hitler, the Nazi dictator, a German citizen, allowing him to run as a candidate for the German Reichstag and become leader of the state. Hitler was employed by the Brunswick State Government in February 1932 and thereby got German citizenship.

It's so fragile that it's displayed for only six weeks per year and the rare gem -- Prince Henry the Lion's highly ornate 12th century book of Holy Gospels -- can now be viewed by the public until March 18. (05.02.2007)

The German Science Foundation named Braunschweig Germany's City of Science for 2007, honoring its potential as a hub for research and development. (28.03.2006)

Planning a trip to Germany in 2007? Before you pack your bag, check out what other DW-WORLD.DE readers had to say about their German travel experience. (04.01.2007)

The City of Braunschweig

More on culture, business, and tourism in Braunschweig (in English).