The bulk of the tanks, fighter jets and helicopters delivered to the Bundeswehr were not ready for deployment, the Defense Ministry has said. Manufacturers delivered 97 large items but only 38 were fully operational. 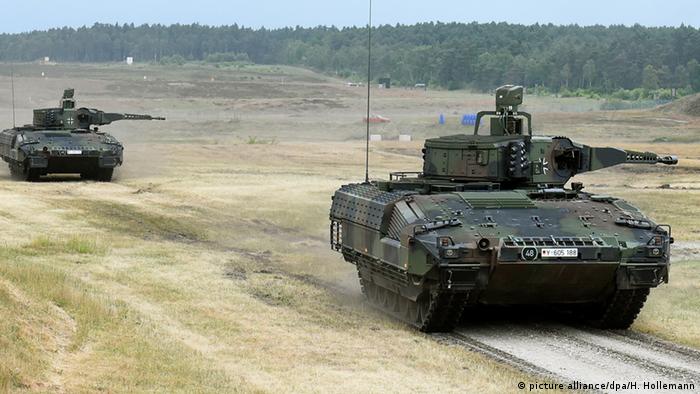 Germany's Defense Ministry said on Wednesday that only 39 percent of large items, such as tanks and helicopters, delivered to the Bundeswehr in 2017 did not require improvement before deployment.

The admission, which came in response to an inquiry from Left party parliamentarian Matthias Höhn, coincides with German troop involvement in a major NATO exercise in Norway and follows calls for improved readiness from defense officials, including Defense Minister Ursula von der Leyen.

Tauber's reply, cited by the German DPA news agency, said the Bundeswehr strove to have 70 percent of its weapons systems ready for operations at any time. In 2017, only 39 percent of new deliveries were ready for deployment.

"As before, we see industry obligated to fulfill the agreed specifications as soon as possible," said Tauber.

'State of the art'

The armored vehicle consortium said the Puma provides its crew with "protection technologies of the latest generation."

What's ready and what's not

Only 27 of the 71 Pumas delivered last year; half of the eight A400M delivered; two of seven Tiger combat helicopters; and four of seven NH90 transport helicopters were operationally ready last year, reported DPA.

Of four new Eurofighter combat jets delivered in 2017, one could be used. The other three were being fitted with new main computers.

"Clearance for the use of these three Eurofighter jets is expected shortly," said Tauber in the ministerial reply.

Höhn said it was a scandal that von der Leyen "tolerates this arms industry' slovenliness at the cost of taxpayers."

In a letter to parliamentarians last June, urging them to boost Germany's defense spending, von der Leyen wrote that declines in the defense budget since the end of the Cold War had resulted in reductions in maintenance and cuts along supply lines for replacement parts.

The German parliament's new commissioner for the armed forces has called on the government to increase the funding of the Bundeswehr. Hans-Peter Bartels made the statement shortly after being sworn into office. (21.05.2015)