Bosnian Serbs to vote on state court system | Europe | News and current affairs from around the continent | DW | 16.07.2015

Legislators in Bosnia's semi-autonomous Serb entity backed the holding of a referendum on whether to continue to recognise the state court system. The US embassy in Sarajevo called the move "work of corrupt forces." 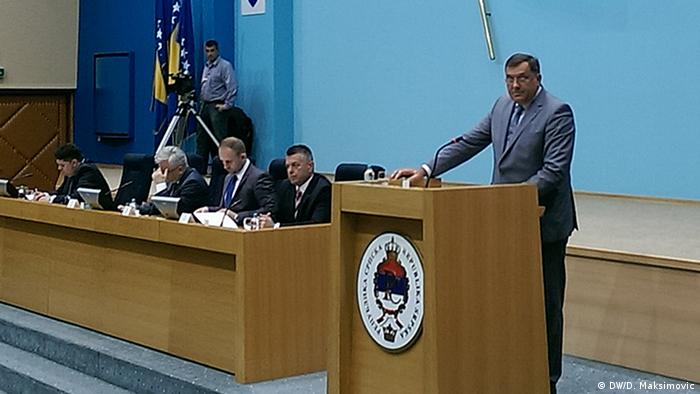 Lawmakers in the autonomous Serb region of Bosnia voted on Wednesday to hold a referendum on the authority of the national court over Serbs, in a move the West says would mark an open challenge to the integrity of the Bosnian state.

By a slim majority, legislators backed the proposal by Milorad Dodik, the president of Bosnia's Serb Republic, who has grown increasingly bold in advocating the country's dissolution 20 years after it emerged from war. Of the Republika Srpska's 83 MPs, 45 voted in favor of the referendum, which should take place within 50 days of the decision's entry into force.

The US embassy in Sarajevo denounced the move as the work of "corrupt forces" and warned it was "engaging relevant US government departments and agencies to determine an appropriate response to those responsible for creating this political provocation."

"The referendum will be held"

Addressing parliament, Dodik argued the Sarajevo-based court was biased against Orthodox Serbs, who share power in Bosnia with Muslim Bosniaks and Catholic Croats.

The two entities have been joined since the 1992-1995 war by weak centralised institutions. Bosnia's tribunal and prosecution were created in 2002 and 2003 by the High Representative for Bosnia and Herzegovina, after the Dayton Agreement that ended the war. The two institutions were set up to process war crimes and organised crime cases.

Thousands of people have gathered in Srebrenica to mark the 20th anniversary of the worst mass killing in Europe since World War II. Dignitaries from across the globe were also in attendance at the memorial service. (11.07.2015)

Chancellor Angela Merkel has pledged Germany's support for Bosnia in the ethnically divided country's efforts to move closer to the EU. Bosnia's government has said it wants to apply for EU membership within two years. (09.07.2015)

Under pressure from the international community, Bosnian Serb leaders in the autonomous Republika Srpska region of Bosnia have backed down from holding a referendum many believed would further split the country. (13.05.2011)