Bosnia becomes front in Balkan fight against terror | Europe | News and current affairs from around the continent | DW | 22.11.2015

Five days after the November 13 attacks in Paris, a terror assault was carried out in Bosnia-Herzegovina. In it, an armed man killed two soldiers. However, the danger from the Balkan country remains minimal. 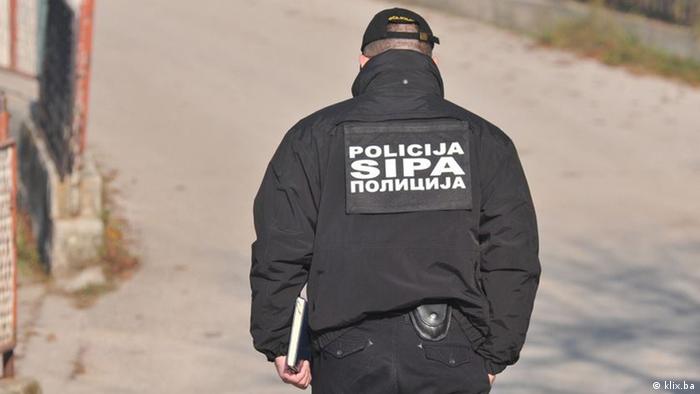 Flags in Bosnia-Herzegovina flew at half mast on Friday as the country paid tribute to the two victims of an attack that took place Wednesday in Sarajevo. In the attack, Enes Omeragic, a Bosnian "Islamic State" (IS) sympathizer, targeted two soldiers, shooting them both dead. Authorities have reported that the soldiers were at a bookmaker's shop on the outskirts of the city at the time. The attacker then killed himself in his family home later that same night. According to the Bosnia-Herzegovina state prosecutor's office, the attack is being handled as an "act of terrorism."

Assaults in Bosnia-Herzegovina have been announced on IS Internet channels. Vijesti ummeta (News for All Muslims), which is based in the United States and bills itself as "a Bosnian-language IS portal," glorified the Paris attacks and in the same text also declared that blood would soon flow in the Balkans. "You fools, Bosnia is awash in the blood of mujahedeen who fought to bring about a Shariah state," the site boasted. "By Allah, this blood was not spilled in vain, this blood has already brought forth fruits, and these fruits will soon make your heads roll from your necks."

Paramilitary fighters - mostly from Muslim countries in the Middle East and North Africa - who fought alongside Bosniaks during the civil war in the 1990s are referred to as mujahedeen. Some 2,000 remained in the country after the war ended. Many married, and for that reason gained citizenship. Not much was heard from them following the war, until about 10 years ago, when Wahhabi adherents began making negative headlines in liberal Bosnia.

At that point, there were more and more reports about the small village of Gornja Maoca in central Bosnia. Women there tended to wear burqas, and it was said that the place was ruled by Shariah. There were also increasing reports of bearded men with short pants harassing young couples for holding hands or kissing in public. As Bosnia-Herzegovina has traditionally been the home of a very worldly and liberal Islam, such activities were met with aversion by the majority of citizens. There have in fact been cases in which Wahhabis were run out of mosques because Bosnian Muslims are so vehemently opposed to extremist attitudes.

Though Bosnian Muslims have long emphasized their adherence to the ideals of a tolerant and peaceful Islam, there are nonetheless factors that serve to promote radicalization among some of the country's youth, the politician Dennis Gratz told DW. Above all, poverty and a lack of economic perspectives tend to be negative influences in one of Europe's poorest countries, Gratz said.

Indeed, there have been a number of attacks in Bosnia-Herzegovia over the past several years. For instance, in 2010 a bomb exploded at a police station in the central Bosnian town of Bugojno, killing one officer and injuring six more. A terrorist who claimed to be fighting for the establishment of Shariah - and against Bosnian Muslims who had "lost their connection to Islam" - was convicted of the crime.

One year later, a man whom police identified as a Wahhabi, began shooting at the US embassy in Sarajevo in the middle of the day. Authorities confirmed that he had been to the village of Gornja Maoca several times before the attack. He was sentenced to 15 years in prison. His accused accomplice was acquitted, after which he traveled to Syria and eventually blew himself up on a suicide bombing mission in Iraq. And, in April of this year, another attack on a police station took place in the city of Zvornik, in eastern Bosnia. One officer was killed and two others were injured. The perpetrator died in the ensuing gunfight with police.

Meanwhile, a law has been passed in Bosnia-Herzegovina that enables judges to hand down long prison sentences for those who travel to take up arms in Syria or Iraq. The law also punishes other activities, such as the recruiting of youths to fight in Syria. It was this law that enabled authorities to sentence the Salafist hate preacher Husein Bosnic, better known as Bilal, to seven years behind bars this month for "public incitement to terrorist activity," the recruitment of fighters for IS and the "formation of a terrorist organization."

According to estimates by Bosnian intelligence services, some 200 Bosnians have traveled to Syria and Iraq to fight with IS this year alone. Most Bosnian Muslims, however, have repeatedly emphasized their own repudiation of such ideology. The Grand Mufti of Bosnia-Herzegovina, Husein Kavazovic, said that the recent attacks in Paris were a "sin against God" and that "terrorism can never be justified: not morally, not religiously and not politically."

That is why experts like Armin Krzalic of the Center for Security Studies in Sarajevo say the scattered groups of radicals are not representative of any larger problem. "What we were able to ascertain with our research - and was in fact corroborated by police and intelligence services - is that there are no Islamist training camps in Bosnia-Herzegovina, contrary to media reports that claimed so," Krzalic said. "There are certain groups that security authorities are watching, and I think that with the help of additional measures, especially in the intelligence sector, these groups can be kept under control." To date there are no official statistics on the number of Salafists in the country, but media reports suggest that there are some 5,000 of them.

Ukraine's state nuclear company says it believes Russia will carry out a major "provocation" at the Zaporizhzhia plant. The UN chief has visited Ukraine's port of Odesa. Follow DW for the latest.

United Nations chief Antonio Guterres has visited the Ukrainian port of Odesa, where grain exports are moving after a monthslong blockade. He said that food insecurity is still a huge issue in developing countries.