Former SS officer Oskar Gröning has been found guilty after his trial for complicity in murder. The 94-year-old, who collected luggage and valuables from Hungarian Jews, was sentenced to four years in prison. 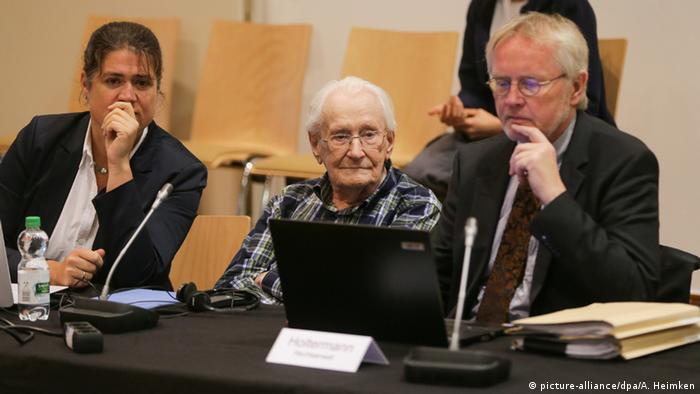 Judge Franz Kompisch handed down a sentence of four years in prison to former SS officer Oskar Gröning, often dubbed the "bookkeeper of Auschwitz," at the district court of Lüneberg in the German state of Lower Saxony on Wednesday.

The 94-year-old was charged with complicity in murder on 300,000 counts in what is likely to be the last trial of a guard at Auschwitz. The sentence is six months longer than the three-and-a-half years public prosecutors had asked for; the co-plaintiffs had criticized prosecutors for setting their sights too low.

The 'bookeeper of Auschwitz' apologizes

Gröning has come to be known as the "accountant" or "bookkeeper" of Auschwitz for his role collecting luggage and valuables from incoming prisoners between May and July of 1944, when the "Hungarian Operation" was in full swing. During that time, when Gröning was 21 years old, about 450,000 Jews were deported from Hungary and sent to the death camp on German-occupied territory located in modern-day Poland.

The defendant also admitted to working the ramps where guards sorted the newcomers into groups of able-bodied workers and those who would go straight to the gas chambers. Gröning has consistently denied committing atrocities, but has asked survivors for forgiveness for his moral guilt for following the instructions of his Nazi superiors.

During final arguments of the trial on Tuesday, Gröning said he fully understood the words of the lawyer Cornelius Nestler, who represented the 49 co-plaintiffs, that "Auschwitz was a place where you could not simply take part." He said that he was "truly sorry" for his role.

His refusal to apologize or admit to wrong-doing earlier had angered survivors, including Hedy Bohm, who remarked last week that it was "too late anyway."

Defense lawyers had been looking for a reduced sentence for Gröning, arguing that the process of prosecuting him had taken too long. First investigations into Gröning began in 1977, and his lawyers argued a verdict against the 94-year-old should have been possible decades ago.

It was not immediately clear after the verdict whether the elderly Gröning would be deemed fit enough to serve his sentence in a jail cell.

Prosecutors call for jail time for 'bookkeeper of Auschwitz'

Lawyers in the case against former SS officer Oskar Gröning have called for the 94-year-old to be jailed for his role at the Auschwitz concentration camp during World War II. Gröning denies personal responsibility. (07.07.2015)