In protest against the increasing persecution of minorities in India, the author Arundhati Roy has returned an Indian national award. She was ashamed of what was happening in her home country, she said. 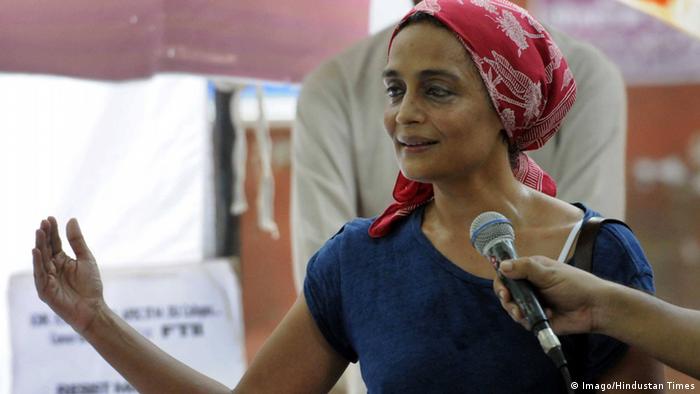 Entire groups of people, such as the Dalits, who are considered "untouchable outlaws," Muslims, and the Christian Adivasi, were being terrorized and never knew when the next attack would occur, wrote the bestselling author Arundhati Roy in the newspaper "Indian Express" on Thursday. In India, people were lynched, shot and burned for their views or lifestyle, she said, and increasing intolerance was an unsuitable description of the mass murder of fellow human beings.

The 55-year-old author is joining the protests of intellectuals in India and like dozens of other writers, filmmakers, actors and scientists she has given back her state award. In mid-October, a group of 41 writers had also returned their state prizes in protest. The intellectuals lament the lack of response of the Hindu nationalist government of Prime Minister Narendra Modi to religiously motivated attacks. The government has dismissed the protest action as nonsensical.

Arundhati Roy was awarded the national prize in 1989 for Best Screenplay. She gained international recognition for her novel, "The God of Small Things," for which she was awarded the prestigious Booker Prize in 1997. Roy has called the protest a "political movement." The revolt of the intellectuals began after an investigative author had been gunned down outside his home. In addition, a lynch mob beat a Muslim to death, because he had been suspected of having eaten cow meat.

Approximately 80 per cent of all 1.2 billion Indians are Hindus. Around 13 percent of the population is Muslim. There are also Christians, Buddhists, Jains, and Sikhs in India.

An Indian state government has banned the environment group's activities in the country citing fraud and falsification of data. The organization has denied any wrongdoing. (06.11.2015)

Traditional and systematic censorship in India

Architecture, Bollywood and Ayurveda: India's image in the world is diverse. But no matter how rich the country's culture may be, critical thinking is undesirable when it comes to topics such as sexuality and religion. (05.11.2015)

If there is one actor who incarnates the Bollywood dream, it's Shah Rukh Khan. The charismatic Indian superstar has many reasons to be called the "King of Bollywood." (02.11.2015)