Bolivian President Evo Morales has opened an "anti-imperialist" army academy in response to a former US program training Latin American military regimes. The school may train soldiers from other Latin American states. 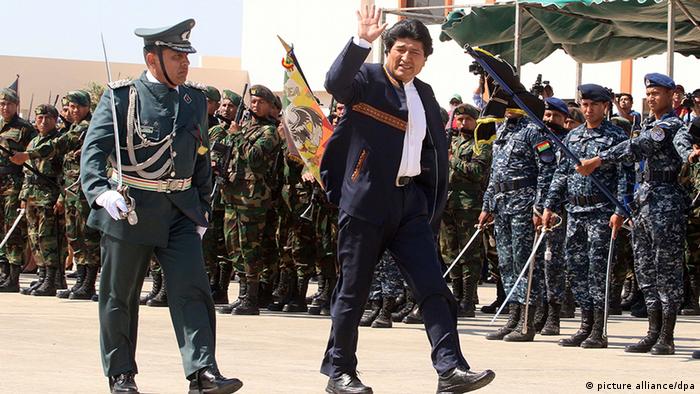 President Evo Morales told the inaugural class of 100 cadets that their mission would be "to defend the people, not the empire."

"We want to build anti-colonial and anti-capitalist thinking with this school that binds the armed forces to social movements and counteracts the influence of the School of the Americas that always saw the indigenous as internal enemies," Morales told a crowd that included the defence ministers of Venezuela and Nicaragua. 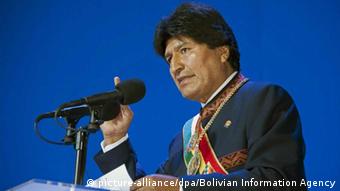 The head of the country's armed forces, General Gonzalo Duran, added that the new school would teach about "de-colonization, gender equality, intercultural understanding and social inclusion."

The program will be made mandatory for soldiers who are seeking to be promoted to captain.

With a population of 10 million people, Bolivia today has an army of some 46,000 troops in is military.

Shaky relationship with the US

Located in the town of Warnes outside the eastern city of Santa Cruz, the academy had previously served as a training ground for UN peacekeeping missions. The re-inaugurated school carries the name of General Juan Jose Torres, a leftist who was Bolivia's de facto president in 1970. Torres infamously expelled the US government's Peace Corps for allegedly sterilizing indigenous women.

Even today, Bolivia's relationship with the Unites States remains rocky. President Morales expelled the US ambassador from the country in 2008, with little sign of rapprochement.

The idea of an "anti-imperialist" military academy was initially proposed by late Venezuelan president Hugo Chavez, who thought such a school was necessary to counter the influence of the School of the Americas in the region, which was launched in 1946.

Bolivia's Cold War-era military regimes received money and training from the United States, which was hoping to prevent the emergence of militant leftist movements in the region.

In addition to providing anti-communist counterinsurgency training to Latin American officers, the US school also trained military and political leaders from some of the region's most brutal military regimes.

Bolivia returned to democracy in 1982, following a series of coups.

Civil unrest in Ecuador ahead of Pope Francis visit

"Even Francis cannot save you!" is written on the banners held by demonstrators in Quito protesting against Ecuadorian President Correa. Political tensions have been rising ahead of the pontiff's arrival. (05.07.2015)