The Bolivian president’s jet has left Vienna after it was diverted on suspicion of harboring US intelligence leaker Edward Snowden. The diversion has sparked a diplomatic row, with Bolivia to file a UN complaint. 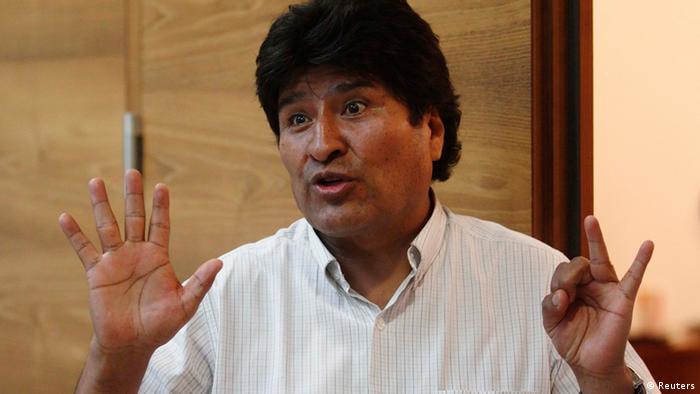 Bolivia's ambassador to the United Nations said Wednesday that the country will file a complaint to the UN after several European countries refused to let President Evo Morales' plane cross over their airspace, calling it an act of aggression.

"The decisions of these countries have violated international law ... We are already making procedures to denounce this to the UN secretary general," Bolivia's UN ambassador, Sacha Llorenti, told reporters in Geneva.

Morales' plane made an unscheduled stop in Vienna en route to Bolivia because France and Portugal revoked clearance for the flight from Moscow late Tuesday night. Bolivia said the flight clearance was canceled because of a suspicion that former National Security Agency (NSA) contractor Edward Snowden was on the plane.

"We interpret this as an aggression" Llorenti said, adding that Bolivia will ask UN Secretary-General Ban Ki-moon to intervene.

The jet has since taken off from Vienna and will land in Las Palmas on the Canary Islands for servicing after the Spanish government authorized it to fly in its airspace.

Bolivian Defense Minister Ruben Saavedra suggested that the US State Department may have been behind the Portuguese and French decision.

"We have the suspicion that [Portugal and France] were used by a foreign power, in this case the United States, as a way of intimidating the Bolivian state and President Evo Morales" Saavedra said.

Whistle-blower Snowden, who recently turned 30, has spent more than a week in diplomatic limbo in a Moscow airport. Morales visited Moscow on Tuesday for a summit of major gas exporters at the Kremlin. Bolivia is one of the countries where Snowden has applied for political asylum.

President continues journey after being forced to land in Austria

Germany was one of the countries to reject Snowden's asylum request, in a joint statement from the foreign and interior ministries issued on Tuesday.

"The conditions for an acceptance are not met," the ministries said. Most German asylum requests, though not all, must be submitted from German soil. When that's not the case, the ministries said, the German government had to consider asylum necessary either due to humanitarian concerns or German political interest.

Poland, India, Norway, the Netherlands and Brazil also rejected Snowden's applications on Tuesday, while Austria, Finland, Iceland and Spain said he would have to apply again from their soil for them to consider allowing him to stay.