Bolivia's Senate has voted to nearly double the amount of land allotted to legal coca cultivation. That could bring the South American nation's expected production to up to 30,000 tons of leaves. 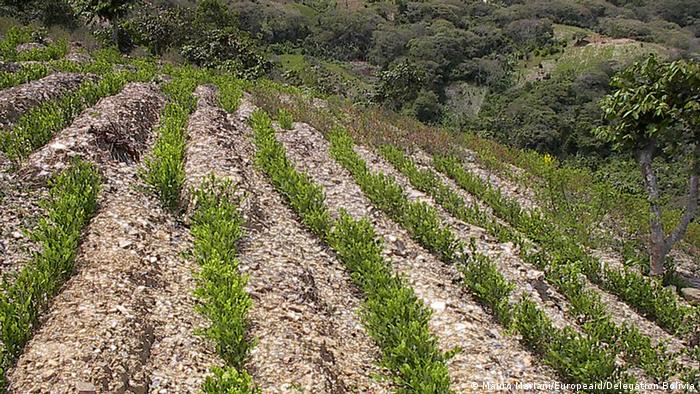 Authorities in Bolivia have intercepted a truck carrying 7.5 tons of cocaine bound to the US, officials said. The truck's driver was released after police determined he did not know the content of the shipment. (02.08.2016)

Bolivia breaks the mold in 'war on drugs'

Instead of ruining farmers' livelihoods by eradicating their coca plots, Bolivia is applying "social control." It's led to a drop in the plant's cultivation in a country the US blames for being a source of illegal drugs. (25.10.2012)

Bolivian President Evo Morales has opened an "anti-imperialist" army academy in response to a former US program training Latin American military regimes. The school may train soldiers from other Latin American states. (18.08.2016)

For centuries, people in Latin America's Andes mountain range have chewed coca leaves to ward off the effects of high altitude or brewed them into tea for a quick boost. Many of the region's indigenous peoples - including the Aymara, the tribe of Bolivian President Evo Morales, who is expected to sign the bill into law - consider the plant holy.

"The important thing has been to stop demonizing the coca leaf, to decriminalize it, to release it," Alberto Gonzales, the president of Bolivia's Senate, said on Friday. "We are talking about a noble, sacred leaf that did not deserve to be stigmatized in the way it was for almost 30 years."

Bolivia needs about 25,000 tons of coca for traditional and religious rituals, said Cesar Cocarico, the minister of rural development and land. He added that Bolivia could industrialize and legally export about 6,000 tons of that to regional nations such as Ecuador and Argentina.

Approved by the legislature's lower house on Thursday, the bill increases a limit put in place in 1988 to combat narcotics trafficking. A 2004 decree allowed for an cultivation on an additional 3,000 hectares, though the real output was estimated to be about double that. The cultivation of cocaine has been constitutionally protected in Bolivia since 2009.

The right-wing senator Wilson Santamaria voted against increasing the limit, saying studies showed that 14,000 hectares - still above the current boundary - would meet the legal demand. And Jorge Quiroga, Bolivia's president from 2001 to 2002 and by miles the third-place finisher in the 2014 election, said increasing the limit would bring on "national shame."

The government originally sought to raise the limit to 20,000 hectares. Officials increased the proposal to 22,000 hectares after an incident in the capital, La Paz, earlier this week, when police teargassed protesting coca farmers who have sought to abolish limits on cultivation altogether.

Bolivia heads to the polls in contentious presidential elections 18.10.2020

One candidate is a school teacher from a Marxist-Leninist party who has vowed to rewrite the constitution. The other a right-wing political veteran whose father is one of the most divisive figures in Peruvian history.