The top prize of the 2012 DW Blog Awards went to an exiled Iranian who, despite his own suffering, keeps an objective eye on Tehran. Other efforts to protect journalists and close the digital divide also earned honors. 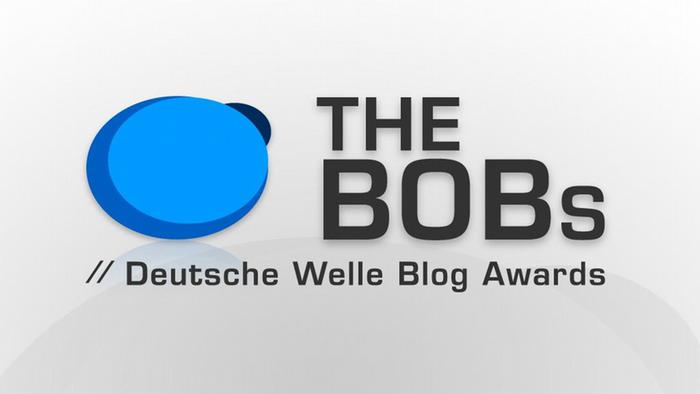 Arash Sigarchi, an Iranian currently living in Washington, got the nod from a panel of bloggers and media experts for writing the best blog at the Deutsche Welle International Blog Award - the BOBs, DW announced Wednesday.

His blog, Window of Anguish, provides readers with an even-handed perspective of the Iranian regime's actions. 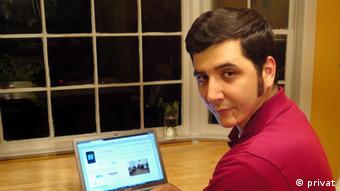 Sigarchi continues to write about human rights and Iran

“Arash has maintained an objective view of events despite the personal attacks and tragedy he suffered at the hands of the government,” Arash Abadpour, the BOBs Persian-language jury member, told the 12-member jury panel.

Sigarchi began blogging in 2002 and was arrested two years later because of his writing and sentenced to 14 years in prison. Nobel Peace Prize Winner Shirin Ebadi took on Sigarchi's case and won his temporary release and a reduction in his sentence to three years, which he continued serving in January 2005.

While in jail, his brother was killed in an automobile crash and Sigarchi was diagnosed with tongue cancer. He was released to receive medical treatment and when the Iranian judiciary requested he finish his sentence he was granted a visa for the United States and left Iran in early 2008. 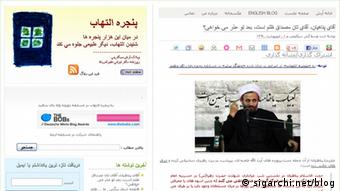 Window of Anguish is widely ready in the Persian blogosphere

While Sigarchi continues to live in the United States, where he works for Voice of America, he represents an important source of information for readers inside and outside of Iran, Abadpour said.

“State influence on traditional media is getting stronger and stronger,” Abadpour said. “Arash is a blogger who found his way in mainstream media and still keeps his connection to Iran in his blog.”

The BOBs jury also honored ongoing efforts to promote democracy by giving its award for the Best Social Activism Campaign to Free Razan, a Facebook campaign that originally pushed for the release of Syrian blogger Razan Ghazzawi. But even after Ghazzawi's release, the campaign continued working to secure the release of other detainees.

“With this award we are drawing attention to the many initatives across the Arab world that support bloggers and activists and to show that the revolutions are not done yet,” Egyptian jury member Tarek Amr said. “Detainees need the attention of the world. Some people are closely watched and some are anonymous but also deserve the world's support and awareness.”

Government actions were also central to the jury's decision to award its Reporters Without Borders prize to Abu Sufian, a Bengali blogger on a personal crusade to call authorities to account for their policies of extrajudicial killing, which has claimed thousands of lives. 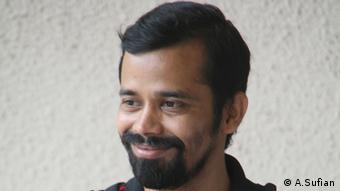 Abu Sufian blogs at great danger to himself

“When Abu Sufian's publisher told him to stop his work, he quit his job to cover the issue,” explained Bengali jury member Shahidul Alam. “Mainstream media have backed off the topic saying it's too dangerous, and this is one man who is putting his own life at risk to cover these killings.”

Boukary Konaté of Mali was another blogger fighting a personal battle to win the jury's esteem. Konaté, who has blogged since 2008 in French and Bambara at Farsokan, describes his work to bring the capabilities of the Internet to rural populations in Mali.

“There is a lot of talk about mobile education communication, but there are major gaps in the world that still need to be filled,” said French BOBs jury member Claire Ulrich. “Farsokan is a person's passion to show others what they need to know not to be on the wrong side of the digital gap and also illustrates the revival of indigenous languages and cultures on the Web.”

While many of the blogs in the DW's 2012 International Blog Awards leveled direct attacks on repressive regimes, the creators of Kuang Kuang Kuang, use illustrations to comments on events in China. 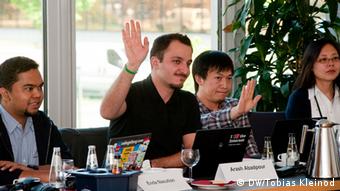 “I never expected my animations from China to get so much attention from people around the world,” Wang Bo told DW in an e-mail. “I see the prize as encouraging creativity and artists' independence as well as their works' value as entertainment.”

The cartoons represent one way to provoke thought without being shut down by authorities, Chinese jury member Isaac Mao said.

“People don't know what they don't know and that plays into the hands of the censors,” he added. “Creative ideas like this help to spread independent views.”

Mapping the path to equality

Maps represented another way of spreading and illustrating information, jury members agreed when choosing the Egyptian project Harassmap as the winner in the category Best Use of Technology for Social Good.

Despite statistics showing that as many as 90 percent of Egyptian women are subjected to sexual harassment, the problem is not a part of the national consciousness and society blames women for harassment and makes them afraid to talk about the crimes committed against them, according to Amr.

“In social media, we are noticing that women are beginning to speak up and that needs and deserves to be supported,” he added. “Harassmap puts numbers in the faces of the Egyptian people who aren't aware that sexual harassment is happening.”

It is the personal efforts like those made by all the BOBs winners that make the BOBs especially important around the world, according to DW Editor-in-Chief Ute Schaeffer.

“Iran, Syria and Russia represent regimes attempting to protect themselves,” she said. “That means bloggers play important roles because they are the ones calling politicians to account for their actions.”

The blog "Window of fear" came first at this year's BOBs in Berlin. The man behind it is an Iranian who was imprisoned for criticizing his country's regime. Now he is in exile, and he is still speaking his mind. (03.05.2012)

See all the winners of the 2012 contest