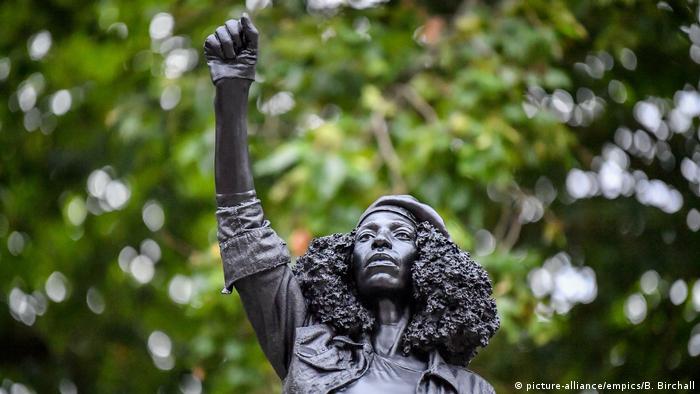 Contemporary British artist Marc Quinn created a sculpture of a Black protester on the empty plinth where a statue of slave trader Edward Colston stood.

The work, called "A Surge of Power (Jen Reid) 2020," represents "a spontaneous moment following a Black Lives Matter protest" Quinn posted on Instagram next to a photograph of his work.

The life-sized sculpture, cast in black resin, shows local resident Jen Reid standing on the vacant plinth with her fist raised in a Black Power salute.

Read more: What should we do with controversial monuments?

Quinn said he made the sculpture after spotting a picture of Reid atop the pedestal on the photo-sharing and social media platform.

The sculpture was put up in the early hours of Wednesday by a team directed by the artist, reported British newspaper the Guardian.

No formal consent from the city of Bristol has been sought for the statue's installation, added Quinn. 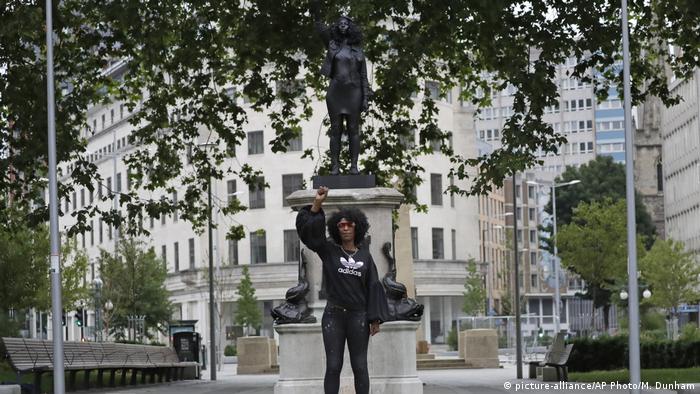 Black Lives Matter and anti-racism protests took place in cities across the world in June, sparked by the death of Black man George Floyd while being detained and choked for nearly nine minutes by police in the US city of Minneapolis in May.

Statues of historical figures with imperialist or racist links were torn down during some of these demonstrations.

In addition to Colston, whose statue was dragged and then dumped in Bristol Harbor, protesters at South Africa's universities defaced colonial-era statues.

Protesters in the Netherlands also gathered to call for the removal of a statue of 17th-century colonial-era Dutch officer Jan Pieterszoon Coen.

In the United States, protesters toppled and set ablaze a statue of a Confederate general in Washington, DC, following nationwide rallies to mark Juneteenth, the holiday commemorating the end of slavery in the country.

A jury in the English city of Bristol has cleared four people of criminal charges for pulling down a statue during Black Lives Matter protests in 2020. They were held accountable after helping to topple the monument of a 17th-century slave trader.

The anonymous street artist said he wanted to raise funds for four people, facing trial next week over the toppling of a statue of a slave trader, "so they can go for a pint."

The statue of British imperialist Cecil Rhodes came under renewed fire during last summer's Black Lives Matter protests. Despite reccomendations to remove it, college officials said it would be too costly to take down.