German trade union Verdi has called for strikes on one of busiest days of the year for Amazon. Workers want to use the day to draw attention to poor working conditions at the online retail giant. 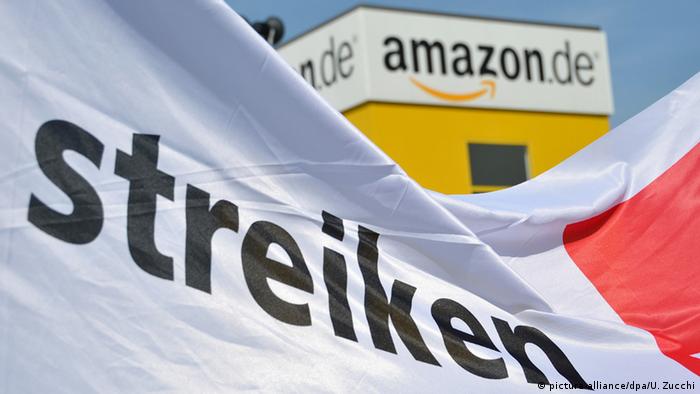 Workers at Amazon warehouses in Hesse and North Rhine-Westphalia have vowed to walk off the job on Friday, hoping to disrupt one of the busiest days of the year for the company.

German trade union Verdi called for its workers at Amazon warehouses in Bad Hersfeld and Rheinberg to strike at the beginning of the night shift on Thursday and continue the work stoppage until the end of Friday.

Friday is a major sale day for retailers, particularly Amazon, with shoppers looking for deals on the American-inspired shopping day known as Black Friday.

Union Secretary Mechthild Middeke said the "end of the year rush is the most stressful time for employees," demanding long hours of overtime. "Employees are particularly important on a day like Black Friday. The commitment of the employees must be better rewarded by a higher salary and by a collectively agreed Christmas bonus," she said.

Silke Zimmer, head of the Verdi regional trade department in North Rhine-Westphalia, said the Black Friday discount campaign was detrimental to the workers.

"Employees currently have to fill up the shelves for the Christmas business as well as send thousands of Black Friday offers. This results in a lot of overtime, which is paid much worse than is the case with companies subject to collective bargaining," she said.

In such conditions, the absence of a collective bargaining agreement becomes painfully clear, Zimmer explained.

"Unfortunately, employees still have to make this clear to the online giant even after four years of strike action, which is why the industrial action measures will be continued today and tomorrow," she said Thursday.

For years, Verdi has fought for a collective bargaining agreement for Amazon employees and for them to be paid according to the retail and mail order rates. Amazon has so far rejected Verdi's demands.

Jeff Bezos, the founder and CEO of Amazon, has committed $2 billion to support schools in low-income areas and help homeless families. This only months after the company resisted a similar effort by the city of Seattle. (14.09.2018)