Bird flu has returned to Germany, with the H5N1 influenza virus breaking out among farm ducks in the eastern state of Saxony, officials said Thursday. 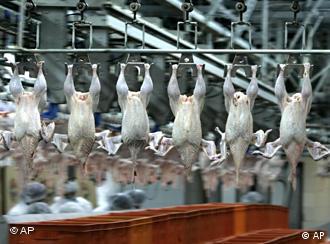 Authorities will cull around 1,000 birds in Saxony

It was the first proven appearance of the disease this year in Germany. Officials said they had sealed off the farm and planned to slaughter the whole flock of ducks at Goerlitz, near the Polish border.

The property contains more than 1,000 birds, mainly turkeys and geese.

Germany's national animal health laboratory on the Baltic island of Riems said the find was "somewhat surprising" as the infection alert had been reduced to moderate after an outbreak was beaten last December.

Then, officials launched the largest-ever bird cull in Germany, exterminating a massive 160,000 geese over a weekend in Wachenroth, Bavaria.

It remained unknown what proportion of wild birds in Germany were infected, a spokeswoman said.

None of Germany's neighbours are currently reporting any H5N1 detections, with the virus having recently shown up in Asia, from which scientists believe it had earlier spread to both Europe and Africa with migratory wild birds.

The virus can be deadly for humans if hygienic precautions are not followed. Human-to-human transmission of the virus has only occurred in very isolated cases and chiefly in Asia.

Scientists fear the virus could mutate into an easily transmittable human disease causing a pandemic. The H5N1 strain of the bird flu virus has killed more than 200 people worldwide since 2003.

In August, US scientists raised the prospect that a bird flu strain other than H5N1 could mutate to infect humans.

"Since their introduction into land-based birds in 1988, H9N2 avian influenza A viruses have caused multiple human infections and become endemic in domestic poultry in Eurasia," a study published in the journal of the Public Library of Science had said.

"This particular influenza subtype has been evolving and acquiring characteristics that raise concerns that it may become more transmissible among humans.

"Our results suggest that the establishment and prevalence of H9N2 viruses in poultry pose a significant threat for humans."

Germany has raised its bird flu risk assessment level after it was reported that 38 new cases of the deadly H5N1 strain were discovered in the country's east. France also reported new cases and upped its own alert. (06.07.2007)

The deadly strain of the bird flu virus has resurfaced in Germany in at least three birds the state of Bavaria. They are Germany's first confirmed cases this year. (24.06.2007)

While European governments aren't hitting the panic button as yet, the spread of bird flu has definitely got a lot of people fearing that the end is nigh. Bird flu psychosis is spreading faster than the virus itself. (21.02.2006)