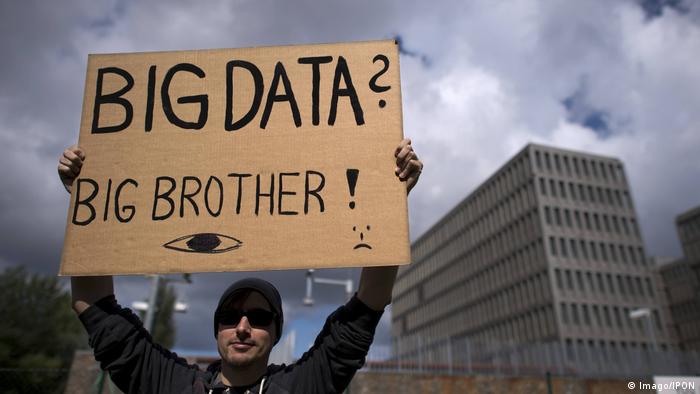 The European Court of Human Rights (ECHR) has admitted a Reporters Without Borders (RSF) complaint claiming that people are not properly protected against groundless and unjustified mass surveillance by Germany's foreign intelligence service, the BND.

The admission of the complaint on a European level opens up the possibility, "of finally remedying this untenable abuse of law," said Christian Mihr, executive director of the RSF, an international organization that represents the interests and safety of journalist worldwide.

Mihr sees it as an encouraging sign that in May 2020 Germany's Constitutional Court ruled on the activities of the BND.The ruling stated that so-called strategic surveillance activities carried out by the intelligence agency are incompatible with the fundamental human right to privacy and the freedom of the press.

Article 10 of the German constitution guarantees the fundamental right to protection of telecommunications privacy, which can only be limited in grave exceptions to protect Germany against armed attack and acts of terrorism as well as cyberattacks, cross-border crime such as the narcotics trade, money laundering and people trafficking.

The BND is, in well-founded individual cases, permitted to restrict fundamental laws and freedoms. However, members and supporters of RSF argue that the legal provisions that permit such intrusions are too far-reaching.

They allege that the practice of tapping internet hubs using search terms known as selectors amounts to groundless mass surveillance. The BND uses this procedure to trawl hundreds of millions of emails for what it sees as suspicious information.

Inner-German communication, which the country's foreign intelligence service is legally prohibited from accessing, is allegedly filtered out of the trawling process. But how exactly that takes place has not so far been plausibly accounted for by the BND.

Moreover, it is not clear whether the BND can actually guarantee that it is always able to filter out irrelevant telecommunications content. So the exact number of people who may be getting caught in the BND net without their knowledge remains unknown.

And that is precisely where Reporters without Borders comes in – with its complaint at the European Court of Human Rights. Whether any victim of targeted or arbitrary surveillance has ever know that they were under scrutiny is questioned in the Strasbourg notice of appeal.

"What is known is that in the last 40 years there has not been a single case in Germany where measures undertaken by the BND have been subjected to court review on the basis of such notification," said Reporters Without Borders in its statement to the European court.

A large number of those who are affected do not even find out with hindsight that their emails were screened, the NGO explained.

The country's Parliamentary Oversight Panel publihses an annual report detailling what surveillance measures have been taken. But that only becomes available after all protocol data have been deleted. In this way, the BND is obliged to document mails that were on closer inspection found to have been screened out as not "relevant in intelligence terms."

Andre Hahn is a member of parliament, the Bundestag, for Germany's Left party.  He is also a member of the Parliamentary Oversight Panel. And he believes that the RWB complaint is an "important step."

The fact that it has been admitted by the European Court of Human Rights, will, he says, lead to a revision of the standard practice in German courts, according to which complaints against mass surveillance of Internet traffic by the BND are repeatedly rejected on purely formal grounds; courts in Germany only admit complaints against mass surveillance if a complainant can prove that he's been directly affected by the surveillance.

If the complaint lodged by Reporters without Borders in Strasbourg is successful, the BND would in future be obliged to inform victims of surveillance after the act.

RSF believes that they would then for the first time be in a position to take legal action against being spied on. RWB believes that would send out a powerful signal beyond Germany's borders.

Industrial spying and the BND

The "snowballing surveillance strategies" adopted by the BND do not only pose a threat to the protection of the journalists' sources that is such a central element of press freedom in a democracy. They also undermine the credibility of German demands on authoritarian regimes to respect press freedom," thus depriving journalists in such countries of an advocate in their battle against surveillance and other forms of repression."

Reporters without Borders is in no doubt that it has itself in the past been the subject of unjustified BND surveillance. As proof, the organization points in its complaint to figures dating back to 2013. It was then that whistleblower Edward Snowden revealed how the US National Security Agency (NSA) has been spying on the Internet worldwide. At this time, the NSA was in effect using the BND listening station in Bad Aibling in Bavaria as a subsidiary.

The 2013 report from Germany's Parliamentary Oversight Panel refers to 12,523 search terms being employed to scan hundreds of millions of emails for suspicious content. Among which there were 15,401 so-called "hits."

"What that means is mails that the BND believed had to be manually examined because, for legal reasons, they probably should not have been intercepted in the first place. Among this "bycatch," as such hits are called in secret service jargon, there were, in the final analysis, just 118 emails deemed "relevant for intelligence purposes.

The resources invested and intelligence yielded were, according to Reporters without Borders, "grossly out of proportion." And, after its success in challenging the BND's strategic surveillance activities, RSF intends to use its high international profile to find out how often it was itself spied on — possibly with the aim of taking recourse to further action.

Angela Merkel's government in Berlin now has until the beginning of March to bring the dispute with the European Court of Human Rights to an amicable solution.