Beyoncé and Jay-Z's latest video has been described as a brilliant reinterpretation of Western paintings and sculptures celebrating African-American identity. The Louvre museum explores the works on show in the clip.

Beyoncé and Jay-Z's video for the song "Apes**t," from the Carters' surprise joint album Everything is Love, has been watched over 57 million times on Youtube since its release in June.

Now the Louvre museum, where the video was shot, features a new tour of the 17 paintings and sculptures seen in the six-minute clip, from the monumental white Greek marble Nike of Samothrace to Marie Benoist's Portrait of a Negress.

The video is a definite celebration of the couple's own power, with Beyoncé singing "I can't believe we made it," while she and Jay-Z pose as icons of pop culture in front of some of the world's most famous classical works of art. The Carters are reportedly worth more than $1 billion, according to CNN. 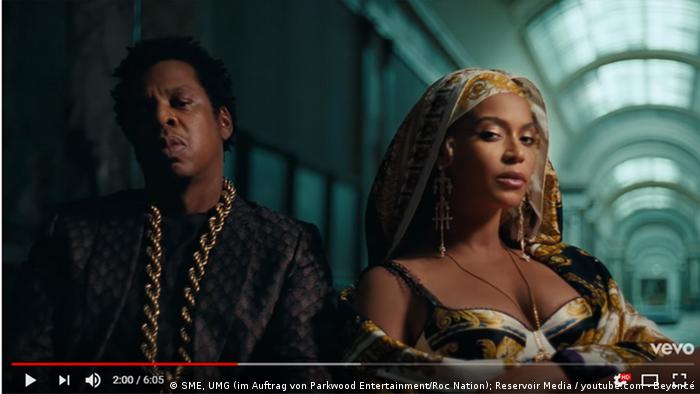 However, the power couple's swagger is not the only aspect that's glorified in the video; they also use their fame to empower and celebrate African-American identity.

In the clip, a woman works on her friend's Afro in front of the Mona Lisa, as if they were in their own living room. Black dancers take over the space of the prestigious French museum, which, like all Western art museums, has little space dedicated to non-white artists.

It is rather filled with artworks associated with Napoleonic conquests, as well as numerous colonial acquisitions in its Egyptian gallery. Marie-Guillemine Benoist's Portrait of a Negress is one of the rare works depicting a woman with dark skin, and is just one of the symbolic works celebrated in the "Apes**t" video clip.

While the Louvre's guided tour, in French only for now, sticks to describing in detail each artwork featured in the video, the gallery above provides some clues as to their symbolism.

While the latest collaborative work by the Carters — aka power couple Jay-Z and Beyoncé — might have come as a surprise to some, pop music history has brought together way more unlikely musical pairs to sing hit duets. (21.06.2018)

Six famous people with namesakes in the animal kingdom

Sometimes animals are named after celebrities and politicians to draw attention to the creature's plight in the wild. But on certain occasions, it's just because they bear a striking resemblance to their namesake. (14.02.2017)

100 days of Trump: Jay Z's 'Race' and other documentaries you need to watch

As the US president reaches the 100-day mark, these films shed led on the polemical leader and the issues he is facing. Among the upcoming docu-series also exploring Trump's America is a project on race by rapper Jay Z. (27.04.2017)

A year after her passion project “Mozart y Mambo”, Sarah Willis took another trip to Cuba. A currency reform and the corona pandemic have meant difficult times for the Cuban people. But Mozart and Salsa are helping musicians through the crisis.