They like Berti Vogts on the Caspian Sea. The former World and European champion has extended his contract with Azerbaijan to the next World Cup, despite a difficult tenure and an unfortunate toilet paper incident. 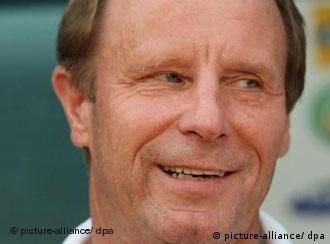 China might long since have overtaken Germany as the world's number one industrial exporter, but there's one sector in which the Chinese still need to buckle down - national football team coaches.

Of the illustrious company that Germany has churned out over recent years - which includes Otto Rehhagel (Greece), Lothar Matthäus (Hungary, Bulgaria), Winnie Schäfer (Cameroon, Thailand), Holger Osieck (Canada, Australia), Ottmar Hitzfeld (Switzerland) and Jürgen Klinsmann (USA) - perhaps the man who has tasted the highest highs and the lowest lows of football fortunes is Berti Vogts, winner of the World Cup as a player in 1974, and European championship as a coach in 1996.

On Wednesday, Hans-Hubert Vogts - AKA Berti, AKA Der Terrier – was offered an extension on his contract with Azerbaijan national team. Should he sign it, he will stay in Baku "sitting in a nice bar, with good fried potatoes and good beer," as he put it, until 2014. That's time enough, miracles permitting, to oversee the Caucasian nation's march to glory at the 2014 World Cup in Brazil.

Followers of Azerbaijani soccer were surprised by the national football federation's (AFFA) unanimous decision to offer Vogts a new contract. In the past six months, all signals had suggested that the 64-year-old would hang up his training cones. 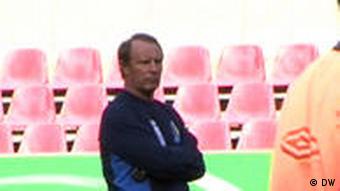 Berti pressured the Azerbaijani clubs to whip their players into shape

From the beginning of his tenure in 2008, Vogts expressed dissatisfaction with the system he inherited. "One hour of football a day is not enough," he grumbled of the Azerbaijani clubs' training methods. On top of that, he hinted darkly of "two other interesting offers" elsewhere, should his services no longer be required.

The discontent was not one-sided. The nation's press frequently complained that the German did not attend enough Azerbaijani league games, and repeatedly used "wrong tactics."

The low-point in the Terrier's relationship with Azerbaijani journalists came on June 5, when six or seven disgruntled reporters confronted him in a corridor following a bad-tempered press conference after a defeat to rivals Kazakhstan. The hacks, apparently lacking more menacing weapons, reportedly waved toilet rolls and a red watering can at the nonplussed gaffer.

Security guards were not required, the incident passed, and Vogts' initial threat to press charges was not followed up - and yet resentment lingered.

Story of a charmless man

Media relations has never been Vogts' strong point. His relationship with the German press during his eight years coaching the national side was never an easy one, even though he is - after incumbent Joachim Löw - the second-most successful German coach ever, calculated by a points-per-game ratio. 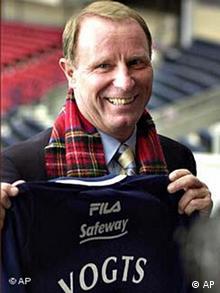 Later, after intervening stints in Kuwait and Bayer Leverkusen, he took over Scotland, where his innate charm did him few favors. "He cracked the bum-clenchingly ill-advised 'Call me Berti McVogts' gag at his maiden press conference in 2002," remembers Scottish football correspondent David Sharp. "When he resigned in December 2004 he was vilified by players, press and spectators alike."

"Under his often bizarre guiding hand Scotland plummeted to an all-time low in the FIFA rankings," Sharp told Deutsche Welle. "All I can remember from that era, football-wise, was torturous matches of turgid mediocrity with goals rarer than a Fabergé egg."

But there have been good times with Azerbaijan. The 1-0 home victory over Turkey during Euro 2012 qualification last October fuelled speculation that Vogts might replace Turkish coach Guus Hiddink. There was also a pride-boosting 1-1 draw with Russia during World Cup qualification in 2009.

Altogether, Berti's 42 matches in charge of Azerbaijan have yielded nine wins, ten draws, and 23 losses. For a country now ranked 113 in FIFA's world rankings (sandwiched between Sudan and Rwanda), that has been taken as a fair yield. Indeed, the Azerbaijanis have made some progress under Berti. When he took over in April 2008, they were at 137, though a brief stint in the top 100 could not be maintained.

AFFA seem happy enough, anyway, even though executive Kasbek Tuajev did not exactly gush when announcing the contract offer - "All in all, the Euro qualification campaign was not bad," he said. After careful consideration, AFFA went with Vogts rather than another illustrious candidate - coaching journeyman Sven Goran Eriksson was reportedly waiting in the wings. 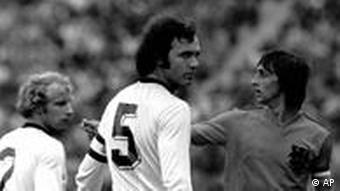 As a player, Vogts won the World Cup, but he was always in the Kaiser's shadow

Again, Tuajev's endorsement was not exactly ringing: "Anyway, Eriksson would have had to break himself in. So it's better if Vogts carries on."

The Terrier earned his nickname during a playing career in which he exemplified the principle that sheer effort and tenacity could replace technical talent.

During the 1974 World Cup, the five-foot-six defender was always in the shadow of the magisterial, six-foot midfielder Franz Beckenbauer - a problem that lingered when he had to fill the Kaiser's impossibly big boots after the 1990 World Cup triumph.

But those core qualities have clearly never deserted him as a coach.

Afghanistan currently languishes in 181th place in the global soccer rankings. But that could be about to change as Afghan expats look for talented players in Germany, to beef up their national side. (11.09.2011)

Klinsmann tries to work the old 2006 magic with US

Jürgen Klinsmann, the man who led Germany through the World Cup "fairytale" of 2006, has just won his first game with the US national side, on his fourth try. But can his unrelenting optimism take the US further? (12.10.2011)

Lothar Matthäus, perhaps the greatest German player of his generation, is available, having just suffered the indignity of being fired as coach of the Bulgarian national team. So why won't any German team touch him? (22.09.2011)