A costly and lengthy renovation project in Berlin's most visited museum has turned into another construction nightmare. The monumental Pergamon Altar will move into a temporary exhibition in the meantime.

President of the Prussian Cultural Heritage Foundation Hermann Parzinger was "shocked, to say the least" when he heard the news. The Federal Office for Building and Regional Planning, in charge of the renovation of the Pergamon Museum, revealed that the building's restoration was not progressing as planned and that the project would be almost twice as expensive as initially estimated. 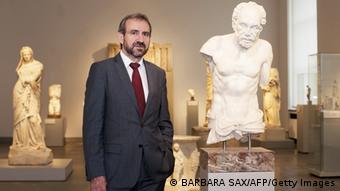 Hermann Parzinger is president of the Prussian Cultural Heritage Foundation

Now parts of the monumental Pergamon Altar are to be moved into a privately financed "transition hall." In a building right by Berlin's Museum Island, the Wolff Group from Stuttgart plans to set up a temporary exhibition showing it. The company expects to recover their expenses through entrance fees. Visitors will get to live "the wonderful experience of the Pergamon Altar," Parzinger told DW.

Highlights of the temporary exhibition

As of 2018, the temporary exhibition will show a huge panorama created by artist Yadegar Asisi. The parts of the original sculptures of the altar that can be moved, as well as reproductions of the Battle of the Giants frieze and smaller friezes, will be at the center of the show. They will be accompanied by an exhibition on the monument. 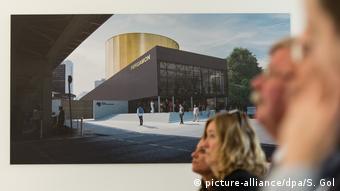 The Pergamon Altar will also be shown in 3D animations. Experts of the Darmstadt Fraunhofer Institute had laser scanned the 113-meter-long (370-foot-long) frieze before it was put into storage and prepared a 3D model of it.

Currently, the world-famous Pergamon Altar is packed and covered, protected from the dust and debris of the construction site. "Steel beams and building materials are now being carried across the hall that attracted loads of visitors and made the Pergamon the most-visited museum in Berlin," writes the German newspaper "Tagesspiegel" to describe the prominent construction site on Berlin's Museum Island.

Three years ago, planners, architects, conservationists and construction workers started the renovation while the museum was kept open. The renovation was therefore described as open heart surgery.

Some 80 years after its opening and decades after the massive damage caused by World War II, a general refurbishment of the three-winged building appeared inevitable. A fourth wing was also to be added to the museum.

The costs of the project were estimated at 261 million euros ($285 million) for the first construction phase. The Pergamon Altar hall was to reopen in 2019, which meant Berlin would be losing a major attraction for a few years.

Now the calculated costs have exploded to 477 million euros and the reopening of the monumental hall is pushed back by four years  to 2023. 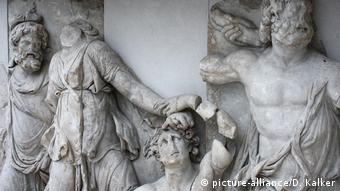 A detail of the Pergamon Altar

The main reason for the rising costs and delays is apparently two pump houses built in the ground. The pumps served during the initial construction of the building, between 1910 and 1930, to pump out the ground water, but they had not been removed afterwards, explained the German Ministry of Construction. Such complications had not been discovered before the beginning of the renovation works. Planners had not done any test drilling to avoid unnecessarily disturbing the operations of the museum.

Additionally, the costs were estimated 10 years ago. At least 60 million euros of the increase in the project's costs are directly due to the fact that construction costs have since risen.

Fourth wing to be built

The president of the cultural foundation as well as Culture Minister Monika Grütters still intend to stick to the plans. The Pergamon Museum will obtain an additional wing to house an exhibition about the history of architecture.

For the time being, the Pergamon Altar remains inaccessible to visitors. The altar is hidden behind metal plates, monitored by elaborate measuring devices.

The world-famous museum is expected to glance in its entirety in 2023. Until then, the Giants will keep on battling with the Greek gods - but hidden from view.

Parts of the collection of the world famous Pergamon Museum in Berlin during building work is to be moved to a temporary exhibition space. (10.11.2016)

Visitors can explore every nook and cranny of the famous Pergamon Altar from the comfort of their own home, thanks to a project by the Frauenhofer Institute for Computer Graphics Research. (25.05.2016)

Claudia Zöbisch and Joel Ku Caamal from Mexico are the winners of our World Heritage Site photo competition. Their prize: a trip to Potsdam and Berlin. (07.09.2015)