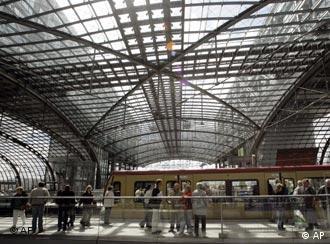 Travelers to Berlin will need to re-orient themselves

Inaugural festivities the night before the station opened, were marred by a knife-wielding youth who injured at least 31 people in a rampage, raising concerns about security ahead of the world's most watched sporting event.

Rail authorities said the first train passed through the new central station 13 minutes behind schedule at 11:56 p.m. (2156 CET) on Saturday night. The first train to travel through the underground tunnel of the station, which took 11 years to complete, half an hour later.

Plans for the capital's central station were made shortly after the fall of the Berlin Wall in 1989, and the opening come just in time to accommodate football fans from around Europe two weeks ahead of the football World Cup 2006 championships kicking off in Munich on June 9.

The station was originally meant to be known as Lehrter Bahnhof but has had a name change to indicate that it is the once divided city's main station. For the first time, the capital's rail network in the south and north is now linked to its counterpart in the east and west.

The long-awaited opening was marred by an incident on Friday night in which a drunken youth slashed at least 31 people with a knife just after a fireworks display at the station ended. The 16-year-old attacked passersby at random, cutting them in the back and on the face, on a street near the Reichstag, home of Germany's parliament. He was caught and arrested around 15 minutes later. 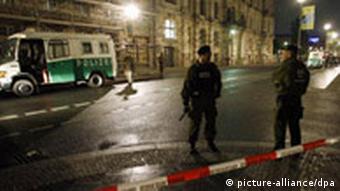 The teenager already had a police record for assault and vandalism

Police said it was the worst attack of its kind yet in Berlin. Chancellor Angela Merkel described it as "a horrible event."

The rampage unleashed an AIDS scare as one of the victims was HIV positive, and there are fears that others may have been infected with the virus by contaminated blood on the knife. By Sunday midday, 56 people, including medics, had contacted Berlin clinics to be treated after having possibly contracted the disease.

A spokeswoman for the Charite university clinic said the victims' chances of communicating HIV were very low. The likelihood of infection through knife wounds was one to 300, she told Reuters.

Interior Minister Wolfgang Schäuble sought to calm fears that security at the world's biggest soccer event was at risk, telling ARD television that the "tragic event had nothing to do with the World Cup."

"Nobody should worry about security during the World Cup, everything that can be done to minimize the risk has been done and is being done," he added.

But a recent spate of brutal attacks blamed on far-right-wingers has caused concern for the safety of foreign visitors. It has also sparked a heated debate about whether Germany has a growing problem with racism and xenophobia, especially in the former communist east of the country.

Last weekend a politician of Turkish origin was beaten and slashed with a broken bottle in Lichtenberg, a suburb of Berlin known as a neo-Nazi stronghold.

A 16-year-old youth armed with a knife wounded 28 people in a late-night rampage in downtown Berlin, leaving one victim fighting for life in hospital, police said early Saturday. (May 27, 2006)

Gerkan: New Station a Perfect Symbiosis of Form and Function

As Berlin's new central station opens this weekend, DW-WORLD.DE caught up with its architect, Meinhard von Gerkan, to discuss the controversial project. (May 26, 2006)

Racist Attacks Have Germany on Edge Ahead of World Cup

Federal prosecutors have released two men suspected of beating a black man into a coma -- for lack of evidence. At the same time, a spate of racist attacks has Germany fearing for its hard-won reputation for tolerance. (May 24, 2006)