Germany has a thriving comic and graphic novel community, and its center is Berlin. DW’s Jane Paulick steps into the world of sequential art. 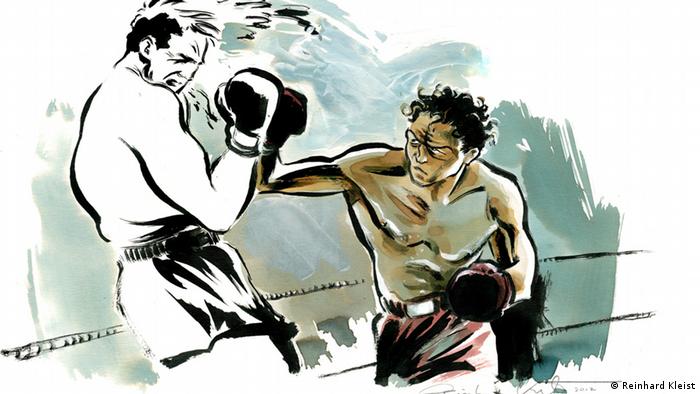 There was a time not so long ago when everyone in Berlin would tell you that they were writing a novel. How passé! These days, they're turning their talents to graphic novels. The term is controversial - to some it just means an expensive comic - but be that as it may, it's a genre that's left the bedside tables of teenage nerds, grown up and gone mainstream.

Sequential art is everywhere in this city, from comic strips luring you away from turgid headlines about the euro crisis and electricity tax hikes every time you open a newspaper, to bookstores' graphic novel sections, which seem to expand exponentially every time you turn your back. I also recently found out that Berlin is home to Germany’s one and only comic book library, the Comicbibliothek Renate in Mitte.

The graphic novel gets serious

While so much of the German capital's creative reputation is hype, the local comic and graphic novel scene is genuinely exciting. It's come forward in leaps and bounds in recent years, spurred on by the international success of titles such as Reinhard Kleist's graphic biography of Johnny Cash, "I See a Darkness," or Ulli Lust's memoir "Heute ist der letzte Tag vom Rest deines Lebens" ("Today is the Last Day of the Rest of Your Life"). 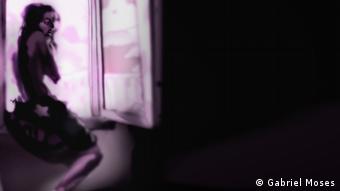 An image from the work of Gabriel Moses

Today, it seems there's no subject matter that doesn't suit the format. Proving increasingly popular are literary adaptations, such as Flix's reworkings of classics "Faust" and "Don Quixote," and Atak's version of Mark Twain's "The Mysterious Stranger." There also seems to be a growing focus on weighty topics: Simon Schwartz's "Packeis" is about African American explorer Matthew Henson, who in 1909 was the first person to reach the North Pole, while in "Alpha: Directions," Jens Harder's subject matter is nothing less than the history of evolution.

It's fair to say that Germany's best comic and graphic novel artists - from Kleist, Lust, Flix and Schwartz to Harder, Mawil, Nadia Budde and OL - are either from or based in Berlin, and many of them take the city itself as a frequent motif, its quirks and characters captured in sequential style with a verve that makes old-school literature look very last century.

Berlin's appeal to people with skill to spare but not much earning power is well-documented, and Dinter likes it for the obvious reasons. "Its atmosphere, turbulence, history, contradictions and its constant state of flux inspire my pictures and the city is often an actor in the stories I tell," he told me. What he does is best summed up by the man himself in another series he created for the Berlin pages of the Frankfurter Allgemeine Zeitung called "Der Flaneur," a nod to German literary critic and philosopher Walter Benjamin, who in the 1920s developed the figure of the flaneur, an urban spectator and connoisseur of the street. 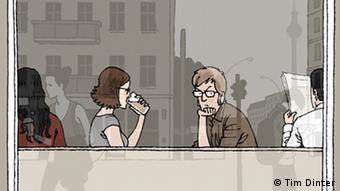 "The city is often an actor in the stories I tell," says illustrator Tim Dinter

But in fact, Berlin's comic and graphic novel artists are hardly carrying on a tradition. The genre is more often associated with Belgium and France, where the art of the bande dessinée spawned classics such as Hergé's Tintin and Goscinny and Uderzo's Asterix the Gaul. 19th century Berlin caricaturist Heinrich Zille is probably the nearest the likes of Tim Dinter have to a creative godfather.

Its very novelty is in fact what makes the scene exciting. Its accelerated development in recent years is due primarily to the emergence of a new generation of artists who graduated from Berlin's Weissensee art school, but it has also been carefully nurtured by independent local publishers such as Reprodukt and Avant Verlag.

In January, Avant celebrated eleven years, eleven days and eleven seconds since its launch with an exhibition and series of events at the Neurotitan Gallery, a Berlin sub-culture institution. I met up there with founder Johann Ulrich, who showed me round and agreed that the scene has never been in better shape. The comic and graphic novel artists he publishes are buoyed by the sense that they're at the dawning of a new era, he explains.

"Ten or twenty years from now, it's possible that we'll look back and see today as a starting point, the time when German-language graphic novels took off," he says. But he resists any suggestion that there's a distinctive Berlin style. "It would be great if Berlin became a byword for quality work, but there's too great a diversity of artists here to lump them all together. It's unlikely that we'll see the genesis of a specific Berlin 'school' - even if there were one, it wouldn't reflect the full scope of the city. The artists are too heterogenous and so is Berlin."