Berlin Will Build Memorial to Gay Victims of Nazi Regime | Germany| News and in-depth reporting from Berlin and beyond | DW | 04.06.2007

Berlin Will Build Memorial to Gay Victims of Nazi Regime

The German government announced plans Monday to erect a memorial in Berlin dedicated homosexuals persecuted and killed by the Nazis. The sculpture should be completed this year. 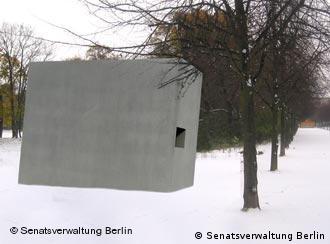 The memorial, to be located in Tiergarten Park, will stand adjacent to the Holocaust Memorial built to honor the lives of the 6 million jews killed under the Nazi regime.

Danish-born Michael Elmgreen and Norwegian Ingar Dragset were selected last year to design the memorial. Their design consists of a large concrete structure with a square opening inside which a film projection will be visible.

The original plan was to feature a looped video of two men locked in an endless kiss but this plan was dropped after complaints that the film ignored lesbians.

Like the Holocaust Memorial, designed by architect Peter Eisenman, the new monument will have the shape and texture of a concrete slab. 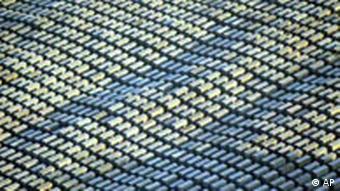 The Holocaust Memorial's 2,751 slabs viewed from the air

Bernd Neumann, Germany's culture secretary, made the announcement on Monday after meeting with supporters of the memorial. According to a his statement the film will now alternate every two years between a clip of men kissing and a clip of women kissing.

“With the installation of a memorial in the middle of our capital, the resolution by the German government to commemorate the homosexual victims of the Nazi regime is realized,” said Neumann in a statement.

The statement went on to state that the memorial should be completed by the end of this year. The German parliament approved the memorial's construction in December 2003 and about 600,000 euros ($800,000) has been pledged to build it.

Under the Nazis, between 5,000 and 10,000 homosexuals were shipped off to concentration camps. During its crackdown the Nazi regime also began 100,000 legal proceedings against homosexuals.

After the war, 44,231 homosexuals were prosecuted in what was then West Germany.

Legal discrimination of homosexuals was outlawed in 1994, four years after unification. East Germany had abolished its anti-gay legislation in 1968.

At least two European lawmakers were among the 31 people police said were taken into custody when gay rights demonstrators clashed with far-right extremists outside Moscow's city hall. (28.05.2007)

Gay rights campaigners from Poland and across Europe marched in Warsaw Saturday in an annual rally galvanized by what activists say is rampant public and official homophobia in this overwhelmingly Catholic country. (20.05.2007)