At least two European lawmakers were among the 31 people police said were taken into custody when gay rights demonstrators clashed with far-right extremists outside Moscow's city hall. 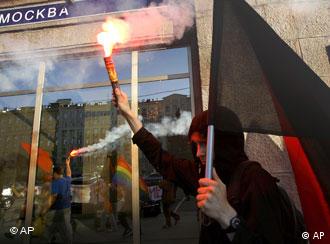 Police detained Russian gay community leader Nikolai Alexeyev and several European lawmakers in central Moscow at the start of the demonstration by dozens of homosexual rights activists campaigning for an end to sexual discrimination.

Dozens of Russian right-wing extremists converged on the group, shouting insults like "fags," "perverts" and "death to homosexuals," throwing eggs and punching and kicking gay demonstrators in front of riot police who intervened much later.

The police also systematically arrested both the attackers and the assaulted. The gay rights activists were also assaulted by ultra-nationalists and Orthodox Church hardliners.

European support for freedom of assembly 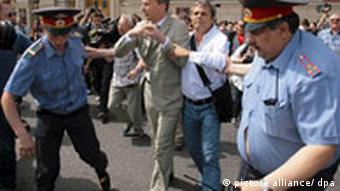 The demonstrators were trying to march on Moscow Mayor Yuri Luzhkov's office to hand over a memorandum signed by more than 40 members of the European Parliament -- requesting permission to hold a march in central Moscow.

Luzhkov had earlier described Gay Pride marches as a "work of Satan."

Also detained were Volker Beck, a member of Germany's parliament; Marco Cappato, an Italian member of the European Parliament, and veteran British gay rights campaigner Peter Tatchell. The politicians have since been released.

Tatchell and Beck were punched in the face in full view of police and dozens of journalists. Another activist was seen bleeding from his face after being attacked. 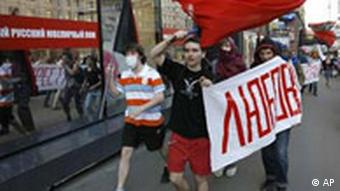 Demonstrators found little of the "love" proclaimed across their banner

The crackdown on the gay rights marchers drew quick condemnation from around Europe.

The mayor of Rome along with cabinet ministers and Italian lawmakers deplored the violence.

"What happened in Moscow, leaves you speechless: to use or even tolerate violence against those who are demonstrating in a peaceful manner for the recognition of their human and civil rights is a sad sign," said Mayor Walter Veltroni.

Cappato was later released after being held for about five hours at a police station with the help of the Italian embassy, officials said.

Beck, who was beaten during Moscow's first Gay Pride march last year, was attacked again by ultra-nationalists and detained by police who then released him after an apology, the russiagay.ru Web site reported.

Rights need to be addressed at G8 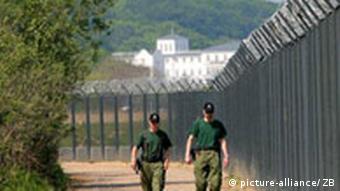 The EU Parliament's Liberal Democrat leader, Graham Watson, said European leaders must raise with Russian President Vladimir Putin at the Group of Eight summit next month "the question of whether Russia still adheres to the values of the Council of Europe, of which it is a member."

Germany's Greens head Claudia Roth agreed that German Chancellor Angela Merkel needed to raise the issue of rights with Putin at the G8 summit in Heiligendamm.

"It has been shown once again today that human rights are systematically abused in Putin's Russia," she said in a statement.

The violence also was condemned by the mayor of another European capital, Bertrand Delanoe of Paris, who slammed it as "clearly inappropriate."

"I would like to denounce the unacceptable violence perpetrated once again by extremists on people peacefully participating in a rally in the Russian capital for the equality of homosexuals," he wrote in a statement.

A number of Russians also took to Moscow's streets to support the right-wing extremists.

"We believe these perverts should not be allowed to march on the streets of Moscow, the third Rome, a holy city for all Russians," Igor Miroshnichenko, who said he was an Orthodox believer who had come to support the riot police, told Reuters.

Igor Miroshnichenko, a deputy leader of a hardline Orthodox Church group, told Interfax that gays were "perverts who violate the will of God."

Russian President Vladimir Putin begins a two day visit to Vienna, Austria. But what was supposed to be a state visit based on trade and energy issues may be hijacked by human rights topics. (23.05.2007)

Gay rights campaigners from Poland and across Europe marched in Warsaw Saturday in an annual rally galvanized by what activists say is rampant public and official homophobia in this overwhelmingly Catholic country. (20.05.2007)

Germany needs to use its influence to improve individual freedoms in China and Russia, human rights activists said. The call came as an EU report highlighted ongoing human rights failings in various countries. (27.04.2007)