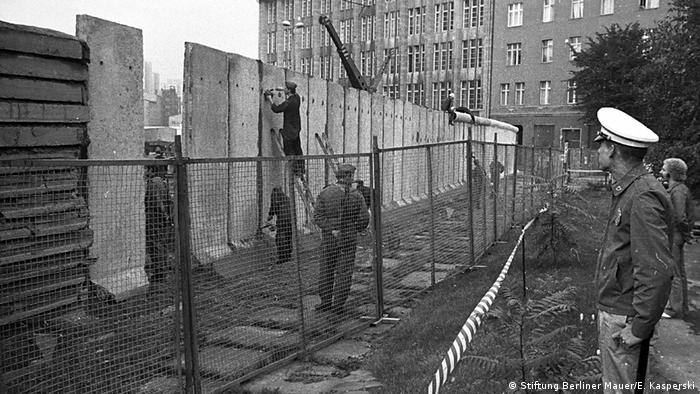 The slabs, painted by Berlin students, were "too brutal," one councilor told the city's community development committee, according to New Zealand's main newspaper-sourced website Stuff.

Christchurch — still traumatized by a March 15 terror attack on two local mosques and in the midst of rebuilding some eight years after a series of earthquakes — was gifted the segments in 2017 by Beratungsgesellschaft, a German construction firm.

On Wednesday, an exasperated former mayor and now counciler Vicki Buck, who was instrumental in getting the pieces freighted to the 340,000-population South Pacific city, said: "I don't care where they go now; I just want them to go somewhere."

Council staff favor the historic riverside park, which has a capacity of 5,000 people for events such as Christchurch's Buskers Festival and its Chinese Lantern Festival, arguing the Berlin slabs fit adjacent examples of brutalist architecture.

The segments' erection was envisaged in Christchurch for the 30th anniversary of the fall of the Berlin Wall in November.

But Councillor Tim Scandrett described Victoria Square as a place of contemplation, saying: "These are too brutal to go into that area."

A majority of councilors at Wednesday's meeting did not support a site other than Victoria Square but agreed the council's decision should be further delayed until park advisers and Ngai Tahu tribal elders had been consulted, Stuff reported.

In 2014, Britain's The Guardian newspaper estimated that about 600 Berlin Wall segments had found new homes outside Germany, making up over 140 memorials worldwide.

They typically exemplify liberty and what Germany calls its "peaceful revolution" of 1989 that saw the collapse of communism in East Germany and the region's formal reunification with West Germany in 1990.

Christchurch's square, formerly a market place, includes numerous works such as a 1903 statue of the 19th-century British monarch, Queen Victoria, and indigenous sculptures — alluding to troubled interactions between former colonial settlers and the indigenous population.

Since 1975, New Zealand has had the now permanent Waitangi Tribunal to handle disputes. The body dates back to 1840 when land-seeking envoys for Queen Victoria and local Maori chiefs signed the Waitangi Treaty.

At least two suspected militants and three soldiers were killed during an exchange of fire at a military base in a border district in Indian-controlled Kashmir. India celebrates Independence Day on August 15.