Alcohol-free beer has always had a poor reputation, largely due to its unusual taste. However opinion of the beverage could be about to change thanks to a new recipe developed at Berlin's Technical University. 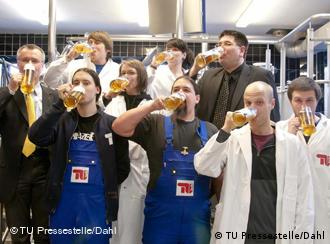 The new beer hit the German market on April 1

Germans and beer go hand-in-hand. At present, Germany boasts some 1,300 breweries producing more than 5,000 brands of beer and consumption of the beverage per capita is ranked third in the world behind the Czechs and the Irish.

The drink is so sacred that its production is protected by the Reinheitsgebot or purity law which strictly regulates what ingredients may be used in its production.

But a poor cousin of regular beer and one which connaisseurs always scoffed at, was the alcohol-free variety. It rarely tasted like beer and sales, especially in Germany, were always poor. But that could all be about to change.

A student-supported research team led by Frank-Jürgen Methner, a professor of brewing science at Berlin's Technical University, which has recently developed a new recipe for alcohol-free beer which come closer to the taste of the real thing than ever before. 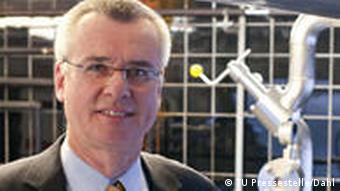 "The biggest problem depends on the processing of how non-alcoholic beer is made," Methner told Deutsche Welle.

"One is that the fermentation is short and done at a very low temperature and the problem with these beers is they still taste like the product before, the wort, so it has some unpleasant flavors. The other procedure is to de-alcoholize a normal beer but the problem there is if I remove the alcohol I also remove many compounds which contribute to the flavor."

A new kind of yeast

The key to the new recipe for alcohol-free beer was to experiment with different types of yeast.

Hundreds were tested over several months in formulation tests generally carried out by students from the Department of Brewing Science. The yeast which provided the best taste is, however, still a closely guarded secret.

"Because we are producing according to the German purity law, I can say that this is not a genetic modified yeast. This is a natural yeast," Methner added, "We have come much closer to the flavor of a regular beer but also the alcohol in a beer gives us some flavor impression and if there is less alcohol, this fact is missing. I think we have taken a big step to come much closer to the taste of a real beer."

The university itself carried out various taste tests during brewing of the new beer and it was favourably evaluated in comparison with beers containing alcohol. So much so, that Hamburg's Holsten brewery, part of the Carlsberg chain, snapped up the rights and rushed it into production. Their new product, Holsten Alkohol-Frei (alcohol-free), was released in Germany in April. 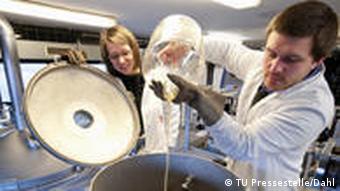 The work is far from over; developing and refining the formula will continue at Berlin's Technical University

Some German beer fans have said that they're willing to give the new brew a shot.

"It really tastes like beer!" exclaimed Hannes Behrmann, an award-winning head chef at Berlin's Renger Patzsch gourmet restaurant. While preferring to cook with wine, he does occasionally add beer to his recipes.

"I think more and more people prefer drinking beer without alcohol and less people drink alcohol in general," he said. "Up to now the alcohol free beer always tasted like something else and we need something that really tastes like beer and has a good quality and I think this is going to be an interesting product."

In an informal taste test in Berlin's Mauerpark, a popular hang-out, some young Berliners sampled the beer.

This time however the bottles were wrapped in paper to disguise the label. The feedback was positive with the group commenting that they liked the flavor. There were gasps of surprise as the paper was torn away to reveal that they had been drinking an alcohol-free beer.

"I wouldn't have guessed that it was without alcohol," said one participant.

"Me neither," added another, "It tastes just like real beer."

"I don't have a drivers' license so I don't need to drive and I never need to drink beer without alcohol but I guess I could drink that," said another.

"Can we keep the beers?" was one cheeky response.

It seems that Frank Jürgen Methner and his team have hit on a winning formula and one, which so far, has won taste tests hands down.

However, Methner is keen to add this his work is far from over.

"We never think that we are at the end of a development," he said, "In the future we will aim for further improvements step by step we hope to get very close to the taste of a normal beer."

There's no love lost between football teams Schalke 04 and Borussia Dortmund. But now there seems to be a prank war on between the two sides' fans: one with potentially mouth-watering rewards. (01.01.2011)

A Bavarian-style bar in Sydney's historic center has found its recipe for success: liter-sized beer steins, dirndl-clad servers, and plenty of something Germans are admittedly less well-known for - fun. (15.01.2010)