Berlin Paper Girls give the gift of art to passers-by

They don't deliver newspapers, but instead, Berlin's 'Paper Girls' whiz by on bicycles, stopping only to drop artworks in mailboxes or hand them out on the street. 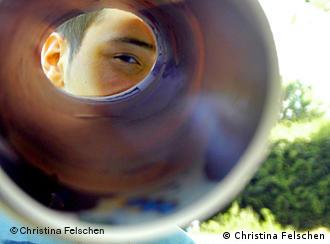 Rolled up, the artworks are easy to slip through car windows or into people's hands

In Berlin, some young women have taken the idea of newspaper delivery to a whole new level.

Armagan Isbay is one person to benefit from the service. Sitting in front of his pizzeria in a quiet corner of Berlin's Wedding district, someone tosses something to him. Instinctively, he catches it and then unrolls the package to reveal graphic and silk-screen prints and photographs. Before he can even jump up to thank the delivery woman, she speeds off again on her bike.

The woman is one of a group who call themselves the "Paper Girls." They slide rolled up works of art through car windows while drivers are sitting at street lights, or leave them on low balconies in courtyards, or even slip them into an open bag or purse in a cafe. They also pass by dozens of pedestrians each day and toss them packages, like they did for Isbay. 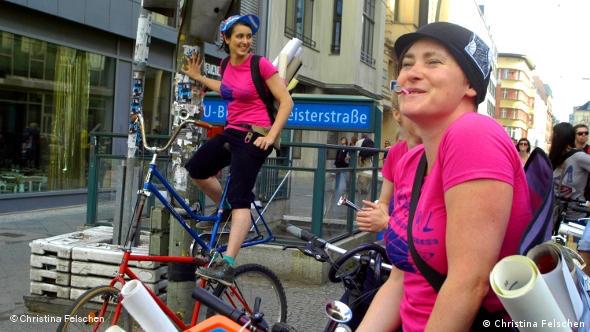 Sitting atop her high "mutant bicycle," Aisha Ronniger, who is in charge of the project, explained that it all started as a joke among design students four years ago. Meanwhile, it has turned the street art scene around the world upside down.

Ronniger found a way of getting around bans on hanging up posters in public areas. "You just have to throw the artworks right in front of people's noses," she said.

The project has grown each year since its inception, becoming more international and multimedial. Nearly 240 artists from 18 different countries have sent their works - both originals and copies - to Ronniger to be considered for the project.

Bloggers, filmmakers and photographers have also helped to promote the idea around the world and make it more international. Berlin's "Paper Girls" now have sisters in New York, Cape Town, Bucharest and Manchester.

Ronniger's art project takes an anachronistic approach that stresses both the art of giving and technical expertise, which she believes is disappearing more and more in our digitized world. "The internet prevents a feel for the dimensions of a work of art, and for its haptics, as well as for the value of the artwork itself," she said. 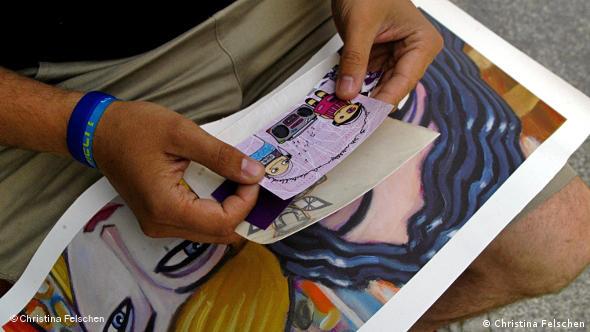 A surprise is always waiting inside

Some of the project's artworks take true and false friends - and everyday life as it occurs on the internet - as their subjects. Artist SP38's posters scream "I don't wanna be U're friend on Facebook." Claudia Berhardt's work shows a woman with a suitcase, who has remembered to pack everything, but doesn't know her destination. "Which way?" reads the speech bubble.

Chance decides, at any rate, which direction the project's art will go. After a two-hour tour around the city distributing the works at random, "the only thing left over is adrenaline," said Ronniger, stopping at a street light.

Andreea Gazdaru and Bianca Mihai want some of that light-heartedness to come to their home town of Bucharest when they start the first Paper Girl festival there in September. "Street art is a luxury in Romania," said Gazdaru, who has a scholarship to participate in the Berlin project, just like some of her other international colleagues.

"Many of the people I know would like to submit their works, but cannot even afford the costs of printing," the 25-year-old regretted. 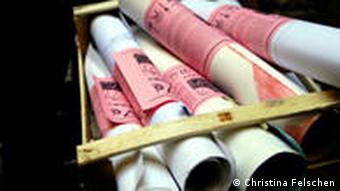 All rolled up and ready to go

Nevertheless, she's certain the project will stirs things up in Bucharest. "Everything still has its place in Romania," she said. "People believe art belongs in museums, and cars on the street."

Marcii Goose has tried to launch the Paper Girls project in Cape Town, but hasn't had an easy time of it. When she tosses things to people on the street, they panic, the South African said. "They usually think a rock is being thrown at them," she said.

For Paper Girls' third run in Cape Town's Woodstock neighborhood, where many poor people, as well as artists, live, rather than throwing the artworks through the air, she took the time to place them in people's hands and talk with the lucky recipients. "We don't want to provoke people; we just want to make them happy," she said.

The 32-year-old had read about the Paper Girls project on the internet and decided it was time for a change in her life. "As a creative director for 10 years, I put art at the mercy of commerce - and at some point, I no longer recognized myself," she recalled. "That's changed now."

Just around the corner

The future for Paper Girls in Berlin, at any rate, is uncertain. Aisha Ronniger has just finished her training as a graphic designer and is ready to pass over the reins. There aren't many around who want to fill her shoes, though. 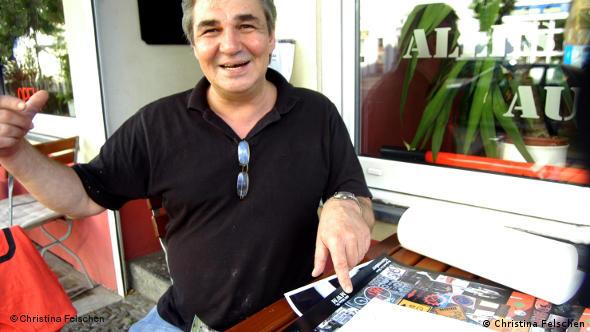 Pizza maker Armagan Isbay may be one of the last to receive art from the Paper Girls. "God has heard my prayers," he quipped, "I had just thought, 'how great it would be if a little more life came into this downbeat corner of the neighborhood.' And then, I got this tossed into my lap!"

Harald Falckenberg started collecting art late in his life. Today he is among Germany's most famous collectors, specializing in the art of civil disobedience. For him, art isn't to look at, but to talk about. (22.07.2010)

In a fight for attention, ads and street art are doing a switcheroo. Street art is imitating sleek corporate campaigns, while ads are now using graffiti-style maneuvers to promote products - sometimes illegally. (28.06.2010)