In a fight for attention, ads and street art are doing a switcheroo. Street art is imitating sleek corporate campaigns, while ads are now using graffiti-style maneuvers to promote products - sometimes illegally. 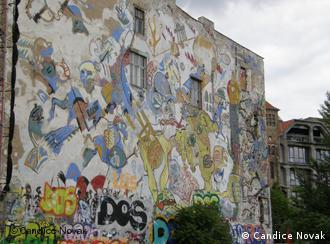 Street artists and corporations are fighting over the same public spaces

Something is not right with this iPad poster in a Berlin subway. Above the words "Easter Celebration," a topless blonde dons a risque bunny suit, legs spread wide. Above the label "Garden Party," there's a photo of two beetles mating on a leaf, then a couple doing the same on a bluff above the words "Hiking Trip."

Each innocuous phrase is meant to be the title of a photo album label on the iPad ad at the Rosenthaler Platz metro station, but has been made ridiculously bawdy by a street artist's changes.

This mixing of territories and styles between two parties who usually find themselves at odds - ad-posting agencies and street artists - is making for a kind of war in the heart of the German capital.

Our modern eye is so accustomed to ads - whether in the form of browser pop-ups or spam emails - that we hardly notice them anymore. But it's the classic print ad - those hanging on billboards or plastered over the windows of empty shops - which has become the battlefield in the fight for attention in the public sphere.

This phenomenon is not unique to the German capital - it reaches from advertising mecca New York City to the booming market of Brazil - but is intensified by Berlin's never-ending construction sites and myriad empty storefronts. 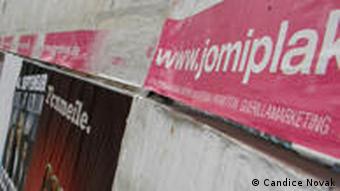 Berlin, with its many construction sites, offers plenty of spaces for guerilla marketers

A growing awareness of how advertising effects their public spaces has brought about some progressive - some would say stifling - legislation. In 2007, the world's fourth most populated city, San Paulo, Brazil, became the first outside the communist world to ban nearly all outdoor advertising with its Clean City Law. The city's conservative mayor, Gilberto Kassab, said at the time that the law aimed to rid the city of "visual pollution."

A few communities in Germany have likewise banned what has colloquially become known as the "poster forest" - row after row of billboards.

Because the average person is bombarded with thousands of advertising messages per day, "companies are faced with the challenge of designing attractive ads which will actively be noticed," Stefan Hampel, advertising expert and marketing professor at the Bayreuth University, told Deutsche Welle.

To do this, many are turning to "wild posting," and other non-traditional advertising methods commonly called guerilla marketing. But Hampel said the problem is that, "legally speaking, guerilla advertising actions often occupy a gray zone."

Thomas Patalas, who heads the MAKS communications company in the western German city of Moenchengladbach has noticed an increase in guerilla marketing over the last couple of years. In 2008, German marketing experts estimated that guerilla tactics represented five to 10 percent of all marketing efforts.

"Today, I would put the number at between 15 and 20 percent," Patalas told Deutsche Welle. "The practice has steadily risen and in the meantime has become a standard in the 'communications mix' for companies."

Since a Berlin-wide effort during the 2006 World Cup in Germany, large international companies including Nike, Nokia and Sony have been putting up mural ads on the sides of buildings painted in graffiti designs. 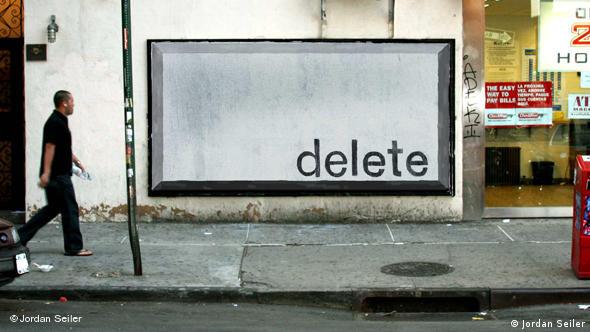 In New York, as in many other cities, both corporations and artists claim space to have their say

The guerilla ads are cheaper, more unique, and more stimulating than traditional ad spots, explained Patalas. And traditional ads just don't work that well anymore. "The trust in promotional effects of advertisements has continued to sink," said Patalas. "It's proportionally at odds with the cost of promotion."

Whenever his company has an ad concept that could potential create legal problems, it has the plan reviewed by legal experts, said Patalas. But not all ad companies are so conscientious.

"Some ad agencies that jump on the guerrilla marketing band wagon are admired for these ad campaign ideas which involve possible legal fines and even calculate them into their budgets, all the while ignoring the possible PR- and image-damage this can cause," said Patalas.

Ogo, which sells a type of smart phone made for teenagers, is one of the companies which has experimented with guerilla advertising - and gotten away with it. In 2008 and 2009 Ogo posted dozens of ads picturing its green three-eyed mascot on the sides of Berlin buildings.

"We didn't want to come across as a corporation," Lars Oehlschlaeger, creative director for the campaign told local media at the time. "Our subversive campaign, on the other hand, was young, impudent and sexy," he said.

Street artists didn't take to the campaign very well: Some sprayed over the pictures with unambiguous messages like "traitor crap" and "shit." However, since the company had made payment deals with building owners, there were no major crackdowns.

The US snack company Mars didn't get off quite as easy. A campaign for its Uncle Ben's rice that had the slogan "Monday is Rice Day" spray-painted on sidewalks and in subway stations throughout the Germany's major cities was met within a day with a stern order from city authorities to remove the ads and pay fines.

"Businesses often are fully aware that their actions draw on this grey area," advertising expert Hampel said. "Often the high efficiency and attention that is generated from the press and publicity outweigh the legal consequences," added Hampel.

Authorities have been more likely to bust "wild" posters in recent years, as the legally questionable ads continue to pop up on construction sheds, fences, poles and building facades, and city officials and citizens become more informed about their legal status.

"What's problematic is whenever the advertising in Germany, as well in the US, impinges upon a third party's rights - like property rights or licensing rights," said Hampel. Some would add the public's rights to that list. 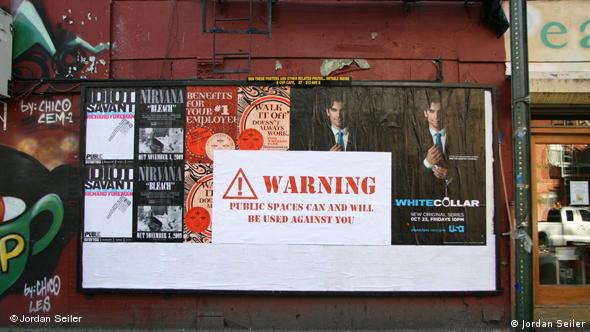 Seiler and New York Street Advertising Takeover tagged ads with new messages; a similar project of that scale hasn't yet been organized in Germany

Though the company did have contracts with the building owners, the spots were not reported to the city, which is legally required of advertisers in New York. NPA City Outdoors ended up leaving the lucrative New York City market because of the legal issues the NYSAT project exposed.

There have been no similar crackdowns in Germany, but a concerted, albeit unorganized effort to take over large advertisements in its cities is taking form.

Roland Brueckner, 27, a well-known Berlin artist, said the proliferation of wild posting means that "the surfaces for street art are lost forever." The result is that street art is jumping into traditional ad space, a trend which the Hamburg-based group Rebel:Art has been documenting around Germany.

The sightings represent the latest effort by street artists who are fighting for space in the cluttered cityscape of legally and illegally posted ads. The "additions" to traditional ad spots mainly serve as social or political commentary on either the product or advertising itself.

"Street art is over," Brueckner said. "The hype is really gone, and everything being put up now is driven by motives other than purely artistic will." 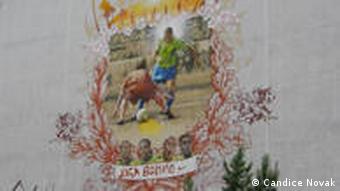 It looks like street art - until you notice the company logo

A race for space

"Street art and graffiti have gotten to a point where they find themselves in competition with commercial media," said Seiler. This has caused street artists to "look to legitimate spots" to get their message out.

The scandalous ad-busted iPad posters in the subway station in Berlin have since been replaced by new ones, but the battle upstairs on the streets continues.

"If you are going to put your work on the street," said Seiler, "why not also comment on the over-proliferation of commercial media at the same time by taking back that space for public communication?"

Boarded-up shop windows make cities look bleak and hopeless. A temporary art space in the German town of Karlsruhe is helping stop inner-city decay and bringing art directly to the people at the same time. (03.08.2009)

For Cologne artists, light is their paint and the world their canvas

They use flashlights instead of spray cans: A new generation of graffiti artists is putting city landscapes in a whole new light. For a group of light writers from Cologne, the world is - literally - their canvas. (29.07.2009)

Living in Germany: Graffiti sprayers in Cologne make their mark