A new exhibition in Berlin aims to explore the many facets of human pain. The challenge lies in demonstrating a subject that is neither tangible nor visible. Curators in Berlin designed “Pain” as a twofold experience. 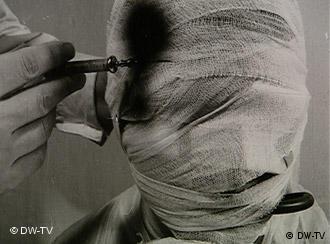 Pain comes in many forms at Berlin's Medical Historical Museum

At the entrance to the Hanburger Bahnhof, a former train station that houses Berlin’s national gallery of contemporary art, the first exhibit that catches the eye is a subtle hint of things to come.

Enclosed in a showcase is a simple piece of wood, about one meter in length and tightly wrapped in a thick leather hide. Up until the 19th century, it was a staple piece of medical equipment: In the absence of effective anesthetics, countless people dug their teeth into this contraption to avoid biting their own tongue off during painful surgical procedures.

More than a relic of medical history, this inanimate object -- full of bite marks -- is capable of invoking harrowing images in the mind’s eye: images of a situation so painful, you can almost feel it. Indeed, that has been the central challenge for this new exhibition called "Schmerz" ("Pain"): How to convey the sensation of pain, without actually inflicting it?

For Hamburger Bahnhof curator Eugen Blume, the solution lies in the mingling of art and science. "The juxtaposition of scientific and artistic works in this joint exhibition is meant to blur the lines between these two areas," he said.

This idea finds its most obvious expression in the fact that "Schmerz" is a joint exhibition involving the Hamburger Bahnhof Museum of Contemporary Art and the Medical History Museum of Berlin's Charité teaching hospital.

The Hamburger Bahnhof explores the subjective experience of physical and psychological suffering from an artistic point of view.

Divided into two distinct sections, "Perceptions of Pain" examines the way in which humans cope with the suffering of others, while "Allure of Pain" delves into individual ways of coping with pain -- including the sexual pleasure that some derive from it.

Just across the street, the Charité museum presents a scientific examination of pain. "Time of Pain" takes a historical view of human suffering and its perception, while "Expression of Pain" takes a look at how we communicate painful experiences to the outside world through the written word, art and music.

Both houses are connected by a "path of suffering": About 400 meters in length, this footpath itself contains 30 exhibits on human suffering.

Taken as a whole, the exhibition aims to "walk the line between science and art," as the preview states, through "combinations and confrontations of artistic works, medical, folkloristic, religious and daily objects." By dividing it up among the two museums, the exhibition also "accommodates the traditional expectations and viewing habits associated with both museums."

The passion of Christ 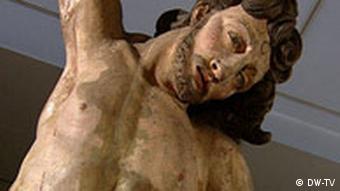 The crucifixion of Christ: the ultimate symbol of pain

Religious artifacts are an important part of the exhibition. In what is perhaps the Western world’s most vivid image of human suffering, the passion of Jesus Christ is in the foreground of these religious exhibits. But always mixing the religious with the scientific, several exhibits also recall the experiments of Frederick T. Zugibes, an American doctor who in the late 1940s hung his assistants by the cross in order to measure the precise pains incurred by crucifixion.

There are also other, more obscure objects to be found, such as a 19th-century "Medicinal Magnetic Cross of Saint Benedict": At a time when people were unsure whether science or religion had the greater curative power, they simply combined the two into one device.

And in the Charité museum, visitors are invited to examine tumor-ridden brains preserved in formaldehyde, skeletons with crooked vertebrae or skulls full of rotten teeth. Stomach ulcers, liver cirrhosis and deformed embryos are all part of this exploration of pain.

Suited for all ages 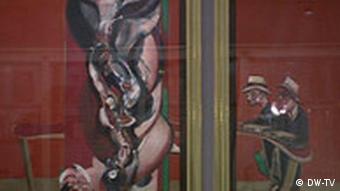 But the exhibition avoids the controversial and the confrontational, and examines pain in a way that is easily digestible. Hardly any of the exhibits approach contemporary topics such as torture, war, terrorism or genocide. "Schmerz" is a G-rated exhibition, suitable for all ages -- a conscious decision, Charité museum co-curator Daniel Tyradellis told Spiegel Online.

The Hamburger Bahnhof and the Charité museum relied on their own Berlin-based collections for this exhibition, rather than importing pieces from all around the world, as is often the case. "Schmerz" showcases artists ranging from Marina Abramovic, Francis Bacon and Joseph Beuys to Louise Bourgeois, Bruce Nauman and Sam Taylor-Wood, among others.

"Schmerz" runs from April 5 through Aug. 5 in the Hamburger Bahnhof Museum of Contemporary Art and the Charité Medical Historical Museum. Tickets cost 12 euros ($16) or 6 euros at reduced price. The catalog is available on site for 39.90 euros (DuMont publishing house, Cologne).

Where will dedicated arts enthusiasts be travelling? Where will those in the know meet? What can no one afford to miss? (18.12.2006)

Museums in Germany see over 100 million visitors a year. For our ARTS.21 series 12 international museum fans show us their personal treasure in the German capital: a painting, a sculpture, an object or a building. (18.03.2007)

Torture is still practiced in many different countries and electro-shockers -- some of which can be bought and exported from Germany -- have become increasingly common in torturing political dissidents. (26.02.2007)