A group wants to rename several Berlin streets that are associated with Germany's colonial crimes. It's high time to show the victims some respect, says columnist Gero Schliess. 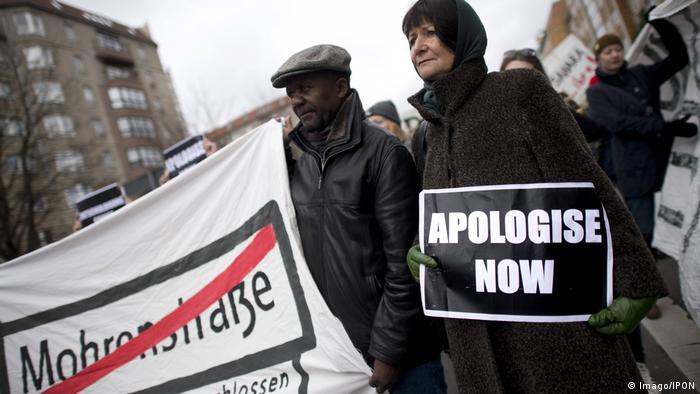 "Mohrenstrasse: closed due to racism."

Mohrenstrasse is a lively street in Berlin's central Mitte district, near the Gendarmemarkt. I must've driven down that street a dozen times, but hadn't once thought of racism - until I saw a photo and the above statement on the website of an organization called Decolonize Berlin.

Is the name 'Mohrenstrasse' racist?

The picture on the website shows the street name, "Mohrenstrasse" (Moor Street), crossed out with a thick red line. Below that, there is an accusation of racism, along with an invitation for a "Third Renaming Festival" to be held on August 23. Unlike at other festivals, it won't be the the alcohol level that will be rising, but the level of frustration. 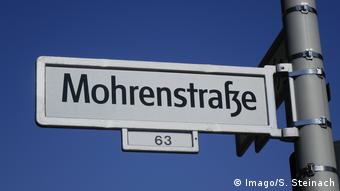 Mohrenstrasse could soon get a new name

What's clear from all this is that Decolonize Berlin - a collective of organizations focusing on the rights of Africans, Afro-Deutsch and on post-colonialism, as well as German NGOs - is protesting the use of the word "Moor" and demanding a new seet name.

But is the word "Moor" racist? I thought at first about the character Monostatos in Mozart's "Magic Flute" opera, who was described as a "Moor." I had to admit: Mozart wasn't exactly nice about it: Monostatos was a bully who scared off women. Does that make Mozart a racist? And what about the "Moor" of Sarotti - both the name and the image on the chocolate bar?

I decided to do my research and speak with historian Christian Kopp, who has been studying colonial history for Decolonize Berlin.

Until our meeting, I had thought that Germany's history with colonialism had begun with Kaiser Wilhelm II and ended with his defeat in World War I - a short, inglorious chapter in which the gruesome genocide of the Herero and Nama tribes in Namibia was the absolute low point. I was wrong!

Read more: Legacy of genocide lingers on for Nama in Namibia

Imagine: There on the streets of central Berlin where Black slaves had their homes in the 18th century.

The nobleman, a slave trader 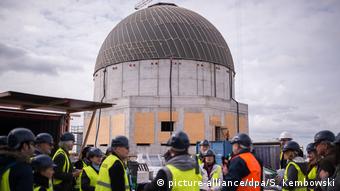 Germany's colonial past will be a focus of the Humboldt Forum, now under construction

The ancestors of the philosophizing, cultivated gentleman Frederick the Great had dragged them here. Yes, the highly venerated nobleman made his money with a colonial stronghold in Ghana and various slave trades in the Caribbean. The same one who required African "Moors" to serve as musicians and servants in the palaces of Berlin's nobility. That's what Prussian refinement looked like.

Nearly 300 years later, that part of history is still one of Berlin's best-kept secrets. Despite political steps taken in recent years, including an initiative to make amends with Namibia and big cultural projects such as the Humboldt Forum, the future museum for world cultures in the heart of Berlin, many German prefer to forget their nation's colonial past.

It is comfortable that way: It is always the others who were evil and exploitative. It's easier to think that Germans had a relatively small colonial empire compared to other European countries, so we must have been the good guys.

But this ignorance hurts! Of course those here who are the descendants of slaves feel insulted by "Mohrenstrasse." That is the oldest German word for a Black person, which was also used in the past to mean a "dumb, simple person." 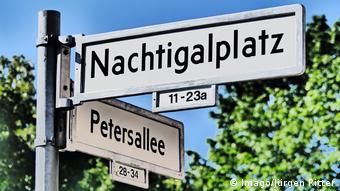 In Berlin's African Quarter, Petersallee and Nachtigalplatz may get new names as well

I can understand the anger well, but have a much harder time understanding the current residents of Mohrenstrasse, who started their own organization to keep what they call "traditional names." They act as if the slave trade is a manifestation of German-African friendship.

The fight for renaming streets is not just centered on Mohrenstrasse, but has reached the working class neighborhood of Wedding. There, as in 30 other German cities, there is a so-called African Quarter. And one of the biggest landmarks to Germany's colonial history. Originally, the laurel wreath made of stone was set to pay homage to Kaiser Wilhelm. Yet at least three of the worst colonialists of the era were honored with street names - and still are.

Included among them are Carl Peters, feared enough to have earned the nickname "Hangman Peters" - something for which the Nazis revered him.

When his violent excesses became known in contemporary Berlin, the city government mandated that the street by renamed for another Peters, namely Hans Peters, who was a resistance fighter against the Nazis. But was that the path of least resistance for the city?

The collective of organizations fighting these names have not accepted this half-way solution - and rightly so. Unlike in the case of Mohrenstrasse, they are pushing for the renaming to take place with a jury that has proposed new names. Among them are the singer Miriam Makeba or Anna Mungunda, the Namibian freedom fighter of Herero descent who was murdered in 1959. Still, some residents are resisting and a court may need to intervene.

Nearly a century after the end of the colonial empire, we still have not found a decent way of dealing with the victims and their descendants. New street names would only be symbolic reparations. If they do not succeed, however, I'd suggest a new street sign: "African Quarter: closed due to racism."

Berlin 24/7: Berlin cross has city up in arms

A cross planned for the top of Berlin's new Humboldt Forum has sparked controversy. DW's Gero Schliess says the row is not just about religious differences, but gets to the heart of the country's identity crisis. (18.06.2017)

Berlin 24/7: It's not all about pandas in Berlin

Panda fever has gripped Berlin. The locals can't get enough of the two new zoo residents, "Sweet Dream" and "Darling." Yet animal-lovers can simply walk through the city to get their kicks, says columnist Gero Schliess. (02.07.2017)

What is Berlin's signature style? Fashion Week graced Berlin for the 20th time this year. But Berliners are far from taking any fashion hints from it, says columnist Gero Schliess. (09.07.2017)