At least twelve sperm whales have beached themselves on North Sea coasts. Experts have to handle them carefullly, as the giant mammals can fill with gases and rupture dramatically. 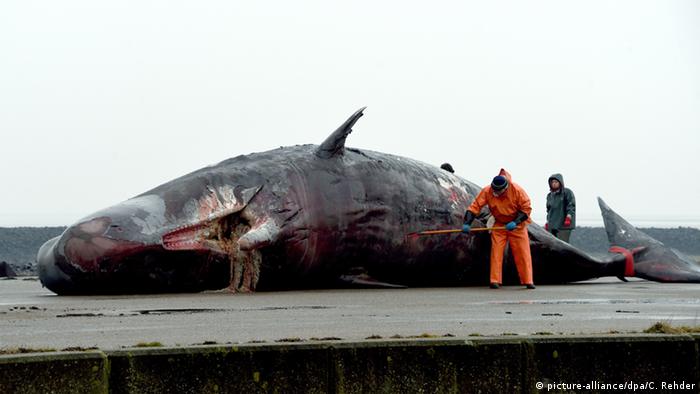 The beaching of a whale, always a sad event, has happened twelve times over the last week on the German and Dutch North Sea coasts.

Conservationists can sometimes manage to return a beached whale into deeper waters, but this time it wasn't possible. All twelve sperm whales were dead when their bodies were discovered on the Dutch island of Texel, the German islands of Wangerooge and Helgoland, and on the coast of continental Germany.

A female sperm whale weighs 15 metric tons, a male up to 60 tons.

When they get stuck in shallow waters and ultimately on the beach, their weight compresses their blood vessels and lungs. Eventually, the giant marine mammals die.

After the animal's death, decomposition starts.

The skin begins to shrivel and gases accumulate in the animal's belly. Bacteria and fungi break down the complex biomolecules that make up a living organism.

When oxygen is present, the gas carbon dioxide develops. In the inside of a whale, under anaerobic conditions (no oxygen), decomposition processes release ammonia as well as poisonous hydrogen sulfide with the characteristic foul odor of rotten eggs. 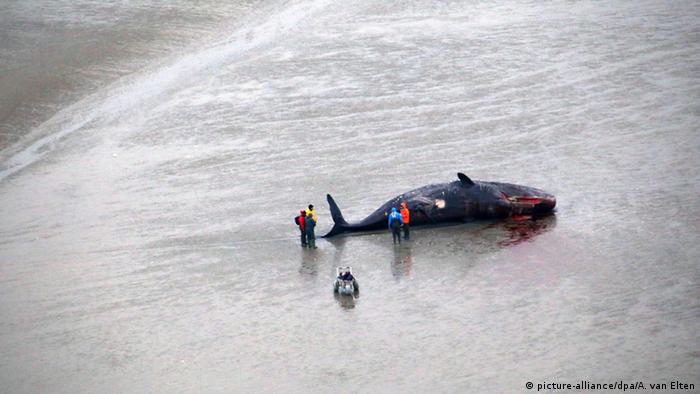 These gases accumulate in the body. If the carcass lies on the beach or elsewhere for too long, the pressure in the inside might get so high that the body ruptures. See a video on YouTube here.

Exploding whales are the exception rather than the rule, though.

In most cases, experts manage to dissect the carcass and remove it from the beach before anything happens.

The warmer the temperature, the higher the danger that the body might explode, as heat accelerates the decomposition process.

It is unlikely that the sperm whale bodies on the North Sea coasts might rupture, experts say. "It's not that warm at the moment," says Mathias Heckroth, who works for the conservation and research organisation Mellumrat.

Nevertheless, German and Dutch authorities are busy removing the dead bodies from the beaches in time.

That decomposing whales can indeed rupture became clear in 2004 in the city of Tainan in Taiwan.

Authorities had loaded a 17-meter long, 50-metric-ton beached sperm whale onto a truck and were driving it into the city for disposal.

During the transport the whale exploded, its remains splashing through the streets.

At other times, explosions are done intentionally.

In 1970, in the US state of Oregon, local authorities decided to blow up a whale carcass with dynamite.

This, however, turned out to be a really bad idea.

The shredded pieces caused a lot of damage to cars, yet were still too large to be eaten by scavengers - the whole purpose of the undertaking. 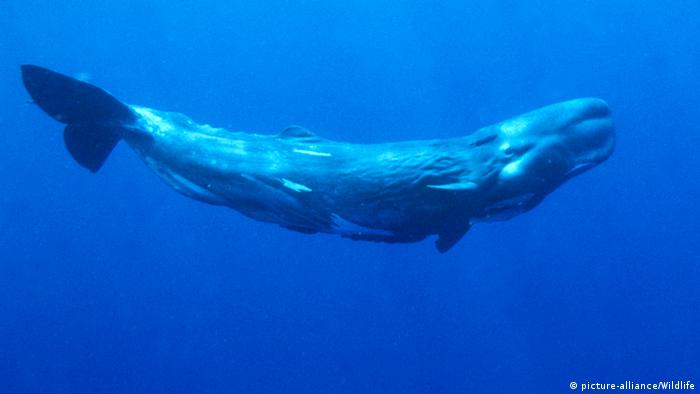 Sperm whales are champions in deep-diving

Why so many strandings?

The shallow North Sea is dangerous for these giant mammals, says Manfred Knake of the conservation organisation Wattenrat East Friesland, since their echo sounding doesn't work sufficiently in the North Sea, which is only up to 100 meters deep. "They get lost."

Experts say that lost whales are not unusual in this region.

"These whales have quite simply made a mistake," said Thilo Maack, marine biologist with Greenpeace, on German TV. "They didn't pass Scotland but turned off into the North Sea. That happens sometimes."

It is the first time that so many whales turned up in German waters, Maack added.

Australia Prime Minister Malcolm Turnbull has said he's "very disappointed" at Tokyo's decision to resume whaling in the Antarctic Ocean. But he added that it won't hurt bilateral relations. (18.12.2015)

Months ago, more than 20 Sei whales were reported stranded in Patagonia. Now, research in southern Chile has uncovered the full extent of the horror: It is possibly the worst disaster ever of its kind. (02.12.2015)

Local media say at least five people have died after a whale-watching tour boat sank off the coast of British Columbia. Multiple injuries have been reported among the 27 people onboard. (26.10.2015)