As the popularity of electric vehicles starts to grow explosively, so does the pile of used batteries. Only about half of them are currently recycled. New EU regulation could boost investment in the nascent industry. 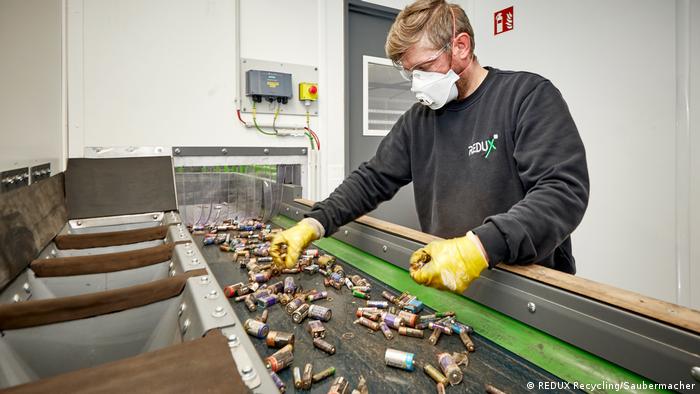 In the yard of the Redux recycling company in Bremerhaven, Germany, a truck is slowly backing into a slot at a cargo ramp. A forklift driver is waiting to unload its cargo of grey barrels, each one of them marked with a green banderole. As he shows the driver where to store the barrels, production manager Alexander Schwarz explains that the green package band signifies "household batteries."

Redux is a recycling specialist for these types of batteries. The plant in Bremerhaven has a capacity of processing about 10,000 tons of them every year and is run by Chief Executive Martin Reichstein and Managing Director Detlef Schmeer.

"Recycling household batteries makes up the bulk of our business, about 90%," said Reichstein in an interview for DW, and Schmeer added that "about 80% of those are single-use alkaline batteries" — the type of primary battery which derives its energy from the reaction between zinc metal and manganese dioxide.

A second life for EV batteries

EU study finds half of old batteries ends up in trash

The majority of household batteries sold at supermarkets and elsewhere is still alkaline-based. Apart from that, there are rechargeable batteries available based on nickel hydroxide and metallic cadmium, so-called NiCad batteries, and more durable lithium-ion cells (Li-ion), commonly used in portable devices and gadgets. The latter type of rechargeable batteries uses quantities of precious raw materials such as cobalt, nickel, copper, and lithium.

According to a study conducted by the Darmstadt, Germany-based think tank Öko-Institute three years ago, about half of all household batteries in this country are collected and recycled. "In 2019, the quota was 52.22%," said Öko-Institute's recycling expert Matthias Buchert. "That was a slight improvement compared with previous years."

Since close to half of all batteries still end up in people's trash bins, Buchert told DW that efforts to collect them "must be intensified." He thinks that the current situation with regard to battery recycling should spur politics into action, especially at the EU level, where relevant legislation dates back to 2006 — a time when lithium-ion batteries were only beginning to hit consumer markets. The battery market has since changed fundamentally, he argued, and precious raw materials used in Li-ion cells are lost forever.

"The cobalt used in notebook and laptop batteries is very lucrative in terms of commercial reuse," he noted, not to mention the growing number of batteries from e-scooters, e-bikes and electric cars coming onto the market. Volumes are still relatively small, he said, but he expects them "grow significantly by the end of the decade."

Buchert demanded that lawmakers start working on solutions to the battery waste problem, including strategies to curb the detrimental social and ecological effects of resource mining, as well as the problems arising from an expected explosive growth of battery demand. 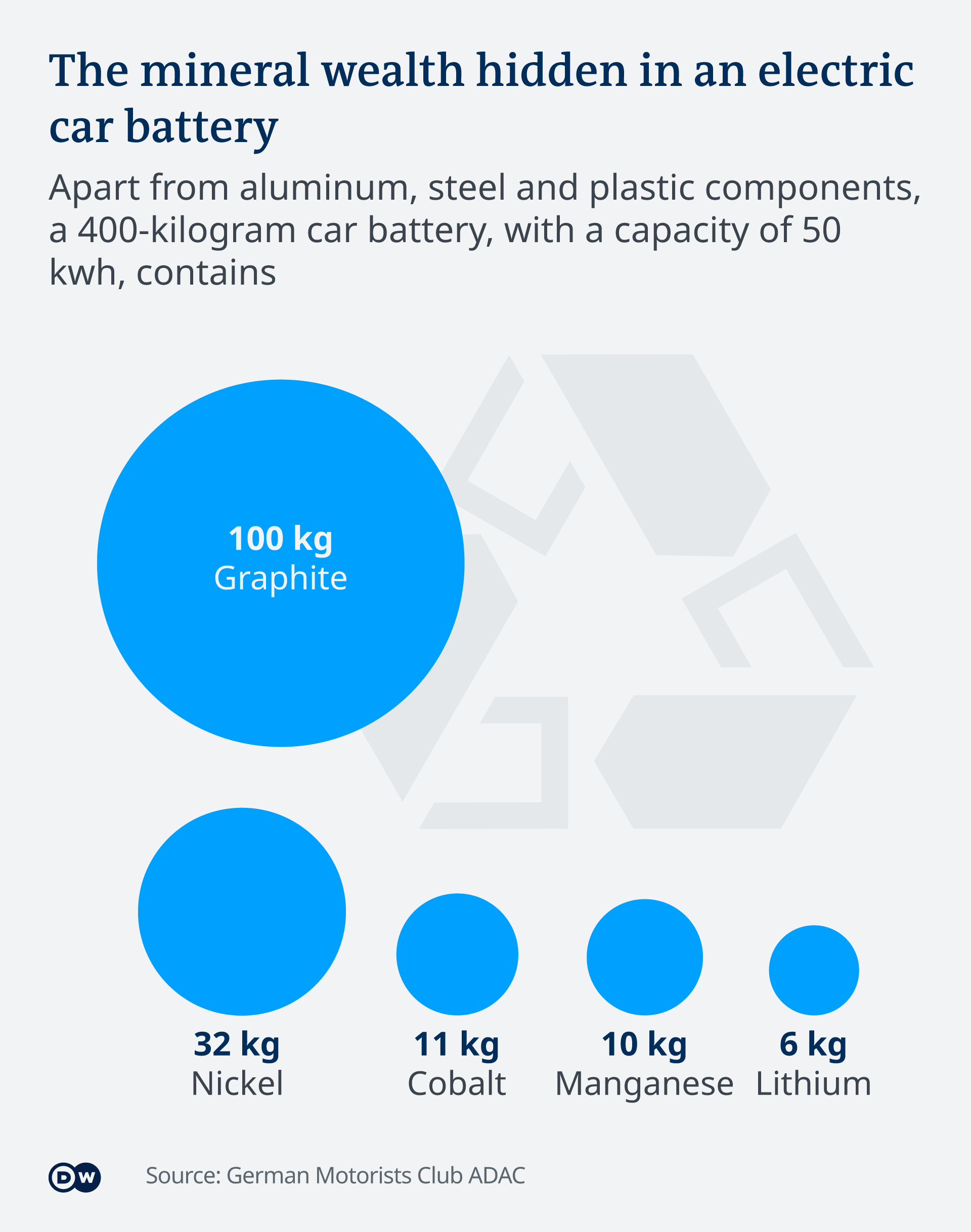 Global electric vehicle manufacturers like Volkswagen (VW) and Tesla are hugely aware of the used-battery problem that could hit their clean-carmaker image amid booming sales. They are investing billions in recycling schemes. The lower-scale recycling of household batteries will likely remain the business of small- and medium-seized companies such as Redux.

However, the company still turns only a meager profit from the effort, said Managing Director Detlef Schmeer. Income from Germany's "Green Dot" nationwide waste collection and recycling scheme would merely cover processing costs, he noted, but there was still no commercially viable market for selling some of the end products of recycling. "We still have to pay companies for accepting and thermally processing the zinc, for example, that we extract from used batteries." 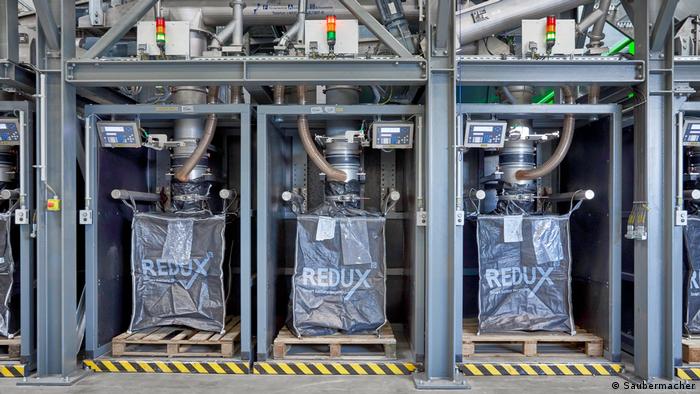 The end products of battery recycling can be a tough sell, especially when they are toxic or hazardous

Schmeer remains optimistic, though, stressing that notably the market for recycled lithium has turned around in recent years. "The end product, which is a fine metallic powder containing rare materials like lithium and cobalt, has found a market where we are actually paid for our product."

Meanwhile, the European Union is in the process of streamlining its 2006 Battery Directive to meet the challenges of increasing battery use in the 27-nation bloc. A relevant draft law is currently being discussed in the EU Parliament and includes a 95% recycling quota for both alkaline single-use batteries and rechargeable NiCad cells by 2030.

Recycling expert Buchert said that technologies in the lithium sector were not advanced enough yet to push for higher quotas there, too. But science is making rapid progress.  "Regarding Li-ion battery recycling the [EU] Commission has proposed a quota of 25% for 2025 and increasing to 70% by 2030," he said, adding that he believed a real system change must include the option of leasing a car battery and replacing it with a new one once its capacity is insufficient. 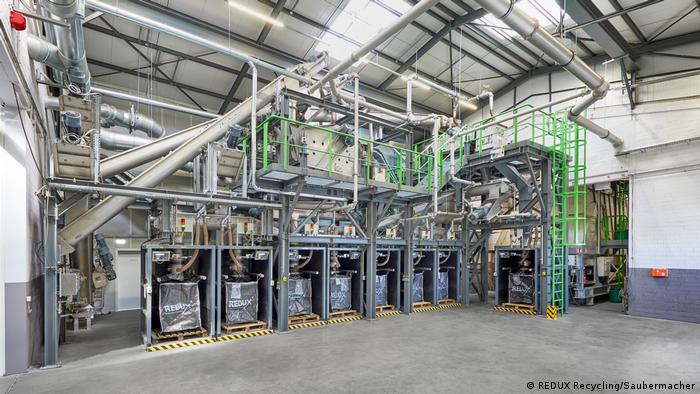 With the market for battery recycling gathering momentum, Buchert urges companies in the sector to invest in fresh capacities to meet rising demand. Smaller companies like Redux in Bremerhafen, he said, may find it hard, though, to compete with the big names in the car-battery recycling market. But in the lower-volume markets of Li-ion batteries for e-bikes, lawn-mowing robots, and cordless electric drills, for example, plenty of recycling opportunities are likely to open up.

Redux chief Martin Reichstein shares his view, stressing that "technologically, we are capable of doing much more." He is confident that in view of recent political steps to boost recycling quotas in the sector, this boom in business is only just beginning.