Basque group ETA has begun to give up some of its weapons, according to international monitors. The Spanish government has said it does not recognize the move, calling for the group's "unconditional disbandment." 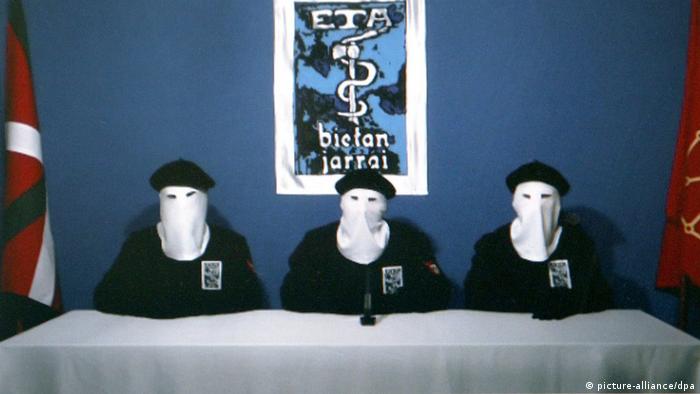 "We have verified that ETA has put out of operative use a certain amount of arms and explosives," said Ram Manikkalingam, the head of the International Verification Commission, a body tasked with ensuring a ceasefire.

At a press conference in the Spanish Basque city of Bilbao on Friday, the commission released a video of black-masked ETA members presenting guns, bullets and explosives to monitors.

"The commission is confident that this step is significant and credible, and will lead to the ETA putting beyond operational use all of its arms, ammunition and explosives," said Mannikkalingam.

According to the inventory presented to media, the group turned over 16.5 kilos (36.4 pounds) of explosives, one rifle, one automatic rifle, two revolvers, 300 bullets, 180 meters of detonating cord, and explosive materials including 4.5 kilos of sodium chlorate and 10 grams of mannitol hexanitrate.

ETA, or Euskadi Ta Askatasuna, was founded in 1958 during the dictatorship of Francisco Franco to advocate for an independent Basque state in northern Spain and southwestern France.

The group, labeled a terrorist organization by both the European Union and the United States, announced a unilateral ceasefire in 2011. The move ended four decade campaign of shootings and bombings in which ETA was blamed for the deaths of more than 800 people.

Despite the cessation of violence, the Spanish and French governments have refused to negotiate with ETA. Spain, which has called for the group's immediate disbanding, does not recognize the International Verification Commission.

"With all respect, we do not need these international verifiers," he told reporters just before Manikkalingam's announcement. "The civil guard and police are enough for us."

"It is a small step, it is not sufficient, but it is a first and necessary step towards complete disarmament," Urkullu said at a press conference. "This is a step on a journey with no return that should have on its horizon the complete and total disarmament of the ETA."

While non-violent leftist Basque nationalist parties have grown in popularity in recent regional elections, ETA has seen its influence diminish following the arrests of senior leaders in Spain and France. Only around 30 of the group's active members are thought to still be at large.