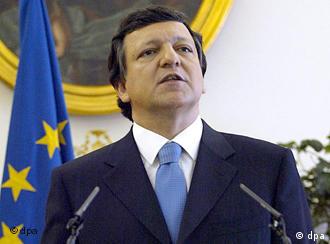 Barroso's appointment ends weeks of deadlock, haggling, and rumors about who would succeed outgoing Commission President Romano Prodi. The 48-year-old conservative lawyer was picked after nearly a dozen other candidates were rejected. His nomination took only minutes, as he had the unanimous backing of his 24 fellow leaders.

But reaching that level of consensus wasn't easy. Horse-trading over who would take the top EU job intensified after EU leaders failed to agree on a candidate at their last summit in mid-June. Analysts say Barroso's first task will be to dispel the notion that he is the "lowest common denominator" -- chosen only because the heads of government couldn't agree on anyone else.

Over the weekend, it became clear that EU leaders were beginning to rally round Barroso. Germany had originally backed Belgian Prime Minister Guy Verhofstadt for the post, but Britain blocked this choice, partly because Verhofstadt was considered too critical of U.S. foreign policy. On Sunday, Chancellor Gerhard Schröder stressed that Barroso could count on his support, and said he saw a "convinced and dynamic" European in the Portuguese leader.

"I don't go back on the fact that I was for Guy Verhofstadt. But I think that Europe is always about finding compromises," Schröder told reporters at a NATO summit in Istanbul.

French President Jacques Chirac also had praise for Barroso, in part, because of his nationality. Barroso will be the Commission's first Portuguese president. After the eastward expansion of the EU, Chirac said it would be good to remember that the bloc also has a south.

The European Parliament still has to approve Barroso's appointment in a vote to be held on July 21 or 22, after he outlines his policies. Speaking earlier on Portuguese television, Barroso vowed to make the EU "stronger, even more cohesive and just, and more intervening on the international scene." 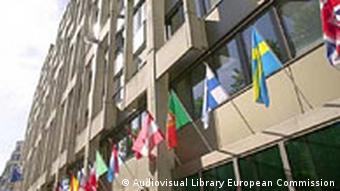 Headquarters of the European Commission

Among the key challenges facing Barroso is a revision of the bloc's budget rules. Last year, finance ministers suspended the rulebook -- which stipulates that member countries must not have a budget deficit of more than 3 percent of GDP -- after France and Germany repeatedly breached the deficit limits.

The Commission also has to ensure that the 10 mainly eastern European nations that joined the bloc in May integrate properly, and prepare for the next wave of EU enlargement that could see countries in the Balkans and southeastern Europe join the family.

Ireland can be pleased with its EU presidency, which ends on Wednesday: Under the country's leadership, the union welcomed 10 new members, agreed on a new constitution and found a new EU Commission president. (June 29, 2004)

The search for a new European Commission president seems finally to have come to an end. Portuguese Prime Minister Durao Barroso is expected to fill a position with prerequisites few candidates can satisfy. (June 28, 2004)

The German government wants EU commissioner for expansion, Günter Verheugen, to stay in Brussels and become the first "super commissioner" for industry and economics. But the conservative opposition is unenthusiastic. (June 29, 2004)