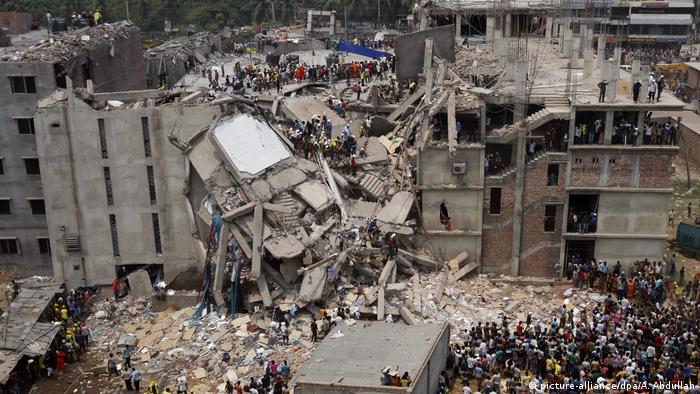 Bangladesh has resumed the murder trial in the collapse of a textile factory after five years of appeals and legal holdups, court officials confirmed.

More than 1,100 workers died when the Rana Plaza factory complex came down on the outskirts of the capital, Dhaka, on April 24, 2013.

In 2016, 41 people were charged with murder for their suspected roles in the disaster, including the building's owner, Sohel Rana, his parents and factory executives.

They were accused of signing off on building standards and forcing employees to work inside the eight-story building despite knowing that it was not structurally sound. But the case was put on hold for more than five years because some defendants tried to appeal the indictment in court.

'Too much time has been wasted'

This week, a judge ordered the trial to resume for 36 of the original defendants. Three have since died, while the cases of two defendants appealing their indictments will be considered separately.

"We want to conclude the trial as quickly as possible. Already too much time has been wasted," chief public prosecutor Sheikh Hemayet Hossain told the AFP news agency. "The building didn't have any [construction] plan. It would shake when machines were switched on. And the owner of the building, Sohel Rana, used hired muscle to force the workers to go to work on the day of the collapse."

The tragedy at Rana Plaza — where clothes for major fashion labels such as Primark and Benetton were produced — put a spotlight on unsafe working conditions in the lucrative textile sector. It also led to calls for clothing brands to take more responsibility for safety standards in their supply chains.

Bangladesh's garment industry is worth some $35 billion (€31 billion) and accounts for more than 80% of the country's exports.