Bangladesh tense ahead of Islamist march | Asia| An in-depth look at news from across the continent | DW | 05.04.2013

As Islamists in Bangladesh gear up for a 'long march' to Dhaka seeking death for 'anti-Islam' bloggers, among other things, many fear the situation in the country could become much more volatile. 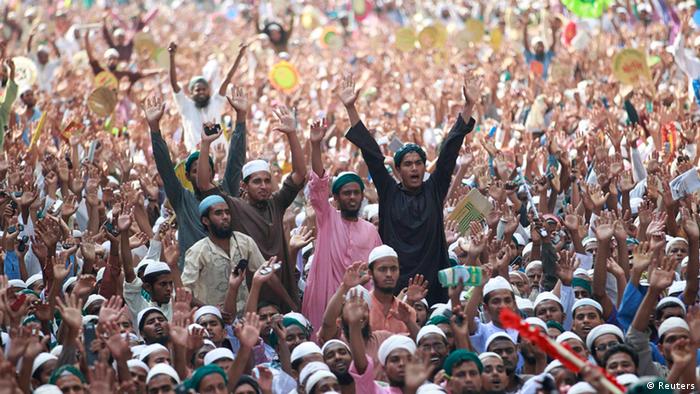 Hifazat-e-Islam, which is believed to be an offshoot of country's largest Islamist party Jamaat-e-Islami and is based in Chittagong in south Bangladesh, has announced that its leaders along with their 5 million supporters from across the country would head for Dhaka on Saturday, April 6 to stage a demonstration in what has been named the "long march."

Seen by many as a counter-move to the recent protests at Dhaka's Shahbag Square by rights activists and anti-Islamists demanding vengeance against Islamist politicians accused of war crimes during the country's 1971 war of independence and a ban on Jamaat, Hifazat's Long March aims to submit the government a 13-point charter of demands.

The parliament has to enact a blasphemy law with provision of death penalty in extreme cases of blasphemy involving Islam and Prophet Muhammad, and the "atheist anti-Islam" bloggers must face stringent punishments- these are the two key demands in the Hifazat charter. 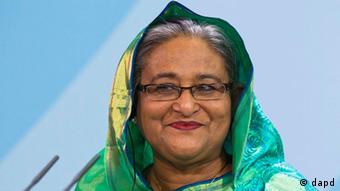 The restoration of the phrase "absolute trust and faith upon Almighty Allah" to the basic principles of the constitution is being demanded by Hifazat.

The group is also demanding that charges against all Islamists who have been arrested in past few months be dropped and they be released from jail immediately.

In an apparent move to pacify Hifazat, the government ordered action against the "anti-Islam" bloggers, with four of them being arrested this week, including most popular blogger Asif Mohiuddin, on charges of defaming Islam, the Koran and Prophet Muhammad. 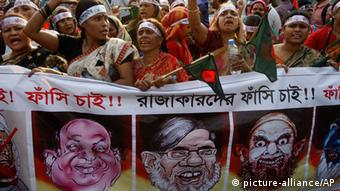 In a meeting with some Islamic scholars who sought action against the bloggers, Hasina said that her government was indeed serious in taking action against all involved in anti-Islam blogging.

"Trust me. Our government will not tolerate any disparaging comments on Islam or the Prophet. We shall take all steps to protect the sanctity of Islam," she assured the scholars.

The prime minister sent one of her ministers as her emissary to meet Hifazat chairman Shah Ahmed Shafi in Chittagong. But Shafi said to the emissary that his organization was firm on going through with the demonstration.

"Our non-violent and apolitical long march will stay peaceful from our side. We are demanding punishment against the bloggers because we want peace in the country. We shall submit our charter of demands to the government as we have planned," Shafi said to the emissary. 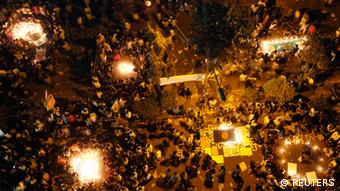 Thousands upon thousands of people participated in the Shahbag protests

Although the Hifazat leader assured that participants of the long march would not turn to violence, in an attempt to keep the Islamists away from Dhaka, anti Islamist groups have called a 24-hour nationwide shutdown across the country starting from this evening, April 5.

"Hifazat-e-Islam has been calling for punishment against the bloggers. But we think these bloggers are innocent. So, to save our children who are blogging, we have called the shutdown and are trying to halt the Long March," Shahriar Kabir, a leader of the groups who have called the strike, told DW.

As the 24-hour shutdown goes to take effect across Bangladesh, in Chittagong, Hifazat leaders and their supporters said that they would defy the shutdown.

"We have 500,000 Hifazat supporters here with us in Chittagong. Tens of thousands of other supporters are also waiting in other districts to take part in this long march. We all will make our best effort to reach Dhaka," a Hifazat leader who did not wish to be identified told DW.

"We have got our vehicles ready. We shall hit the highway for Dhaka soon."

The government of Bangladesh has taken the radical step of banning the blog of Asif Mohiuddin, a 2012 DW Bobs blog award winner. Mohiuddin was brutally attacked by unknown assailants in Dhaka last January. (25.03.2013)

Dominated by kill lists and calls for executions, a series of protests and counter-protests keeps growing in Bangladesh. Organizers of the demonstration that sparked the unrest hope to redefine the country’s politics. (23.02.2013)