In an interview with DW, Bangaldesh's Foreign Minister A.K. Abdul Momen denies claims of rigging, saying 'no election is perfect' and that Dhaka wants to focus on improving the economy. 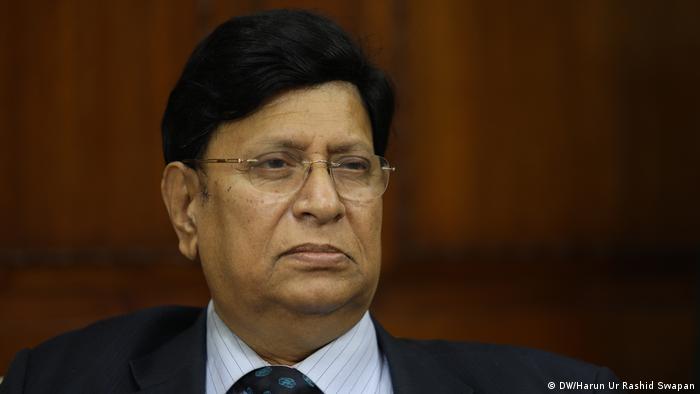 DW: As an economist who has served in the trade and commerce ministry and has experience of managing funds, how do you see your role as foreign minister now? Does this imply that Bangladesh will give more importance to trade and economic development than to diplomacy?

I have decided that the focus of my foreign ministry would be economic diplomacy. We were a Least Developed Country (LDC) until a few years ago and have now reached the status of developing country. We want now to achieve the status of a middle-income country by 2021, the 50th year of our independence, and we want to achieve all the goals for sustainable development. Later on, we want to achieve our dream, the dream of the father of our nation, Bangabandhu Sheikh Mujibur Rahman, of the golden Bengal: a prosperous and stable economy.

In the last national elections, your party, the Awami League won a landslide victory, but there are accusations of massive rigging. What do you have to say about that?

It does not matter much. There is no perfect election anywhere on planet earth, even in the USA or the world's largest democracy, India. There are always some pockets of difficulty. The last, 11th parliamentary election was a unique, beautiful election. Very few people died.

In 2014, around 234 people died on election day because the opposition provoked hooliganism, they boycotted the elections. But in this year's election, in my constituency, not one person died. Only 14 people were wounded. Election day was festival day.

Do you think this election has created a political imbalance within the country?

We would like more opposition parties to be members of parliament. Unfortunately our opposition parties have no goals and their manifestos are just for one individual, not for the people. People voted for the Awami League this time because of many reasons; first is economic development, the country is doing well.

This is because of Prime Minister Sheikh Hasina who has changed the face of the country. In the last ten years, there hasn't been much disruption. Kids can go to school without any fear of bombings or grenade attacks and their parents are happy. Businessmen are happy because they can do good business.

There are reports that as foreign minister, your first visit will be to India. What is the future of relations between India and Bangladesh, considering all the unresolved trade deficit and border issues?

Currently, relations between Bangladesh and India are in good shape. Immediately after the elections, the Indian prime minister called our prime minister and congratulated her. The Indian foreign minister congratulated me and invited me to visit the country. Therefore I decided, India being our biggest neighbor, our close neighbor, and considering our long history of friendship, that I should honor them. So I decided to make India the first country I would visit as foreign minister.

Neighbors always have certain problems, like husbands and wives always have certain problems, but during the last few years, we have resolved most of our mutual problems. Our border issue is no longer an issue. We have resolved the Bay of Bengal problem through amicable discussion and legal processes. We are resolving all our issues. We have signed a 30-year water-sharing agreement. These are small problems, these are not big blocks and we are committed towards resolving all our issues.

Do you have any fresh approach in mind in resolving the Rohingya crisis? How are you going to deal with that?

The Rohingya problem is a global problem. We are being affected today. But if this problem lingers for a longer period, my fear is that other countries will also be affected. Particularly, it will hurt the interests of Myanmar and other neighboring countries. If there is uncertainty, it will create instability in the region and instability is never good for any country or the world as such. We want to solve it peacefully.

Secondly, as long as the problem is still there, I would suggest that the UN secretary general arrange a pledging session and all friendly countries in the world, who value human considerations and rights of individual people, should try to share the burden. They should temporarily take some of them to their own countries. There are many countries who trade with Myanmar, let them get together and request Myanmar to resolve this issue, because Myanmar created the problem. If they resolve it, it is good for them and their future. Otherwise I am afraid that we will all be blamed.

You had a meeting with European Union representatives after the election where you agreed to remain 'constructively engaged' in certain issues? Can you elaborate on that?

What is the state of the relationship between Germany and Bangladesh?

Very good relations. Our father of the nation developed a foreign policy of friendship to all, malice to none. With Germany, we've had a solid relationship since our country was created. Germany is our second-largest trading partner in Europe. Germany has a woman leader, whom it is very proud of. It's the same in Bangladesh, we have a woman leader we are very proud of. These (leaders) are icons in the world. Our prime minister has visited Germany and we hope she visits again.

Bangladesh is a growing economy in the middle of two large economies like India and China. Where do you see Bangladesh in the next five years?

We are very lucky to have two big neighbors, India and China. They are economic giants. India has the highest GDP growth rate in the world and we are next. Over the last several years, they have had miracles and we are lucky because between these two giants, we are trying to develop connectivity and we believe this will help improve our economy. We want to develop connectivity in terms of roads, railways, waterways to help improve trade and investment and also people-to-people relationships.

What is the major challenge ahead for you and the government?

We have big challenges. In the last ten years, we did an excellent job and now people's expectations have gone up, skyrocketed. With the new government,we must try our best to meet their expectations. That is a great challenge — for the government and for my ministry.

The interview was conducted by Harun Ur Rashid Swapan in Dhaka.

Bangladesh held a general election on December 30, a vote that's seen as crucial for the survival of democracy in the South Asian country. Follow DW's coverage of the pivotal elections right here. (11.12.2018)

Bangladesh is one of the world's impoverished nations. Yet, its economy has been growing rapidly over the past few years, thanks in no small part to its massive textile exports. But risks are looming on the horizon. (25.12.2018)