People in Serbia and Bosnia are struggling to deal with the record floods which have inundated vast areas and cut power supplies. There is increasing concern about health problems because of contaminated water. 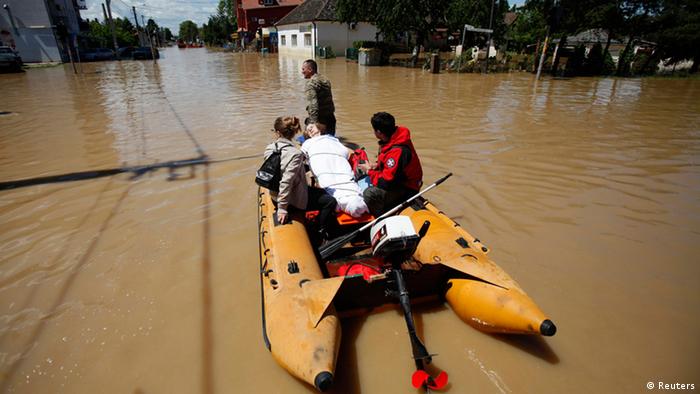 Flooding and landslides are the major problems being tackled by rescue teams and volunteers as the Balkans struggle with the consequences of the worst flooding in southwestern Europe in more than a century.

Serbia's capital Belgrade is preparing for a river water surge that has threatened to inundate the country's main power plant, the Nikola Tesla in Obrenovac on the Sava river just southwest of Belgrade. The coal-fired plant supplies electricity for half of Serbia and most of Belgrade.

Russian cargo planes carrying boats, generators and food joined rescue teams from around Europe and thousands of local volunteers in evacuating people and building flood defenses after the River Sava, swollen by days of torrential rain, burst its banks.

In Bosnia, there are growing concerns over the possible outbreak of disease as temperatures rise. There is a lack of drinking water and electricity, water is polluted and dead animals lie on flooded land.

"We fought and are fighting for the lives of our people. Now we face a period of fighting for the health of our population," said Sarajevo Public Health Institute director Zeljko Ler. "(Potable) water is our absolute priority," he added.

Ler said infectious diseases such as enterocolitis, typhus, and hepatitis were the major threats in stricken areas. The towns of Doboj and Samac were particularly badly flooded.

Access to some areas can only be made by air as landslides and sinkholes have closed dozens of roads in Bosnia.

The landslides have buried houses and moved landmines left over from the war in the 1990s.