'Baking Bread': What bread reveals about the EU

Hosted by political correspondent Georg Matthes, the new DW series "Baking Bread" explores a traditional bread recipe from each of the European Union's countries and humorously links it to the nation's political context.

There are over 10 million photos tagged #bread on Instagram, but the foodies' social media trend definitely wasn't what got Georg Matthes into baking.

Like all other Germans, he obviously grew up with the country's rich bread culture — which was officially listed by UNESCO as Intangible Cultural Heritage in 2015.

Beyond that, bread-making is literally in his genes. Ancestors in his family had a bakery, and throughout his youth, he would loyally assist his grandmother in her numerous baking projects. While he was studying in London at the beginning of the 2000s, he was depressed by the bread that was available there at the time and that's when he "really started baking," he says.

Now a political correspondent for Deutsche Welle, Matthes still enjoys the hobby as a "down-to-earth way of relaxing." His colleagues at DW's Brussels bureau, who regularly get to enjoy his homemade goods, encouraged him to develop a TV series that would combine those two fields of expertise: bread and politics.

The power of a grain of wheat

"All politics emanates from a grain of wheat," proclaimed Mirabeau, one of the leaders of the early stages of the French Revolution. Later, Lenin's battle cry of the 1917 October Revolution was "Peace, Land, Bread," while the early 20th century's women's movement called for "Bread and Roses."

As a pillar of the human diet for thousands of years, bread has not only served as a metaphor for the slogans of revolutions and social upheavals; its accessibility to all classes of the population has also been a real factor in ensuring political stability. "Bread and circuses," a quote attributed to the second century AD Roman poet Juvenal, already cynically underlined how food and entertainment are often more important than any political program in order to upkeep power.

An exploration of the EU in 28 bread recipes

To this day, there are many stories and political allegories that can be found in the baked specialties of a country.

That's what Georg Matthes explores in DW's new series, Baking Bread. In each episode, he presents a traditional bread recipe from one of the 28 European Union countries, spicing it up with "fun facts and hard facts" related to that nation's political culture within the EU.

Using the scale he inherited from his grandmother, Matthes weighs in on the state of the EU and its bread. The short Baking Bread videos combine ideals of the Slow Food movement and satirical jabs with the rock'n'roll rhythm of a famous American TV series starring a chemistry teacher in a meth lab.

What bread reveals about a country

"Bread really stands for Europe. There's such diversity, and it's so deeply culturally rooted in the European idea," says Matthes. In many cases, the special ingredients of a regional specialty are linked to the international history of a country.

For example, as Matthes points out, the leavening agent in Ireland's traditional soda bread, baking soda, actually came from the US. The Irish classic is testimony to the migratory and political ties between both countries, as is the fact that 22 former US presidents had Irish roots — including Obama.

Similarly, the origins of the sesame oil and the rice paste used in the Netherlands' tiger bread can be traced back to Indonesia, which used to be a Dutch colony. Even the mother of the country's most famous ethnic nationalist politician, Geert Wilders, was born in colonial Indonesia. 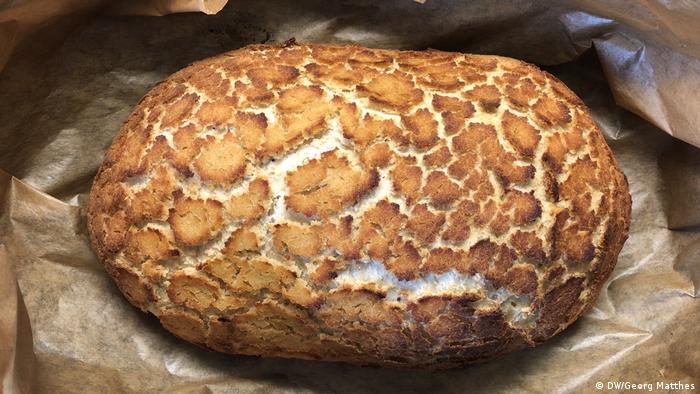 The Netherlands' traditional tiger bread has an Indonesian heritage

The EU correspondent has tested all of the Baking Bread recipes several times himself — even if that meant kneading all night after spending long hours reporting about the latest Brexit developments during the day.

Incidentally, thanks to its craft bakery movement, the UK, still officially part of the EU, has meanwhile turned into one of the best places to get a sourdough sandwich in Europe, according to Matthes.

He also explores the concept of the sandwich in the UK episode of Baking Bread: The innovation attributed to the Earl of Sandwich, dubbed Britain's "biggest contribution to gastronomy" by The Wall Street Journal, is one that only works when you add something between the two slices of bread — and that might well be the EU's role, suggests Matthes.

A recipe with tested rules

The team developing the Baking Bread project initially wondered if they would manage to cover all 28 EU member states or if they should rather produce just a restricted number of episodes. They convinced themselves to go all the way by referring to a German idiom: They definitely shouldn't be "baking smaller bread rolls."

Applying his rigorous approach of testing each recipe several times turned out to be an ambitious challenge, admits Matthes, but baking doesn't allow the same type of improvisation as cooking.

"You need to stick to the rules when you bake bread," stresses the reporter. And that's one of the pieces of advice he also gives to member states undermining the rules of law, such as Poland or Hungary: They should rather stick to the recipe and abide by the rules they signed up for when joining the EU.

Altogether, the Baking Bread series, which launches on January 30 on DW's Arts and Culture, features 28 different videos produced both in German and English. Along with the weekly videos that humorously link recipes and politics, a separate series of video tutorials providing the details of each recipe will be posted on DW's euromaxx Youtube channel.

What do Germans miss when they're abroad?

Missing German bread is a common woe when Germans travel abroad. But as Kate Müser finds out on Meet the Germans, there are a few other very German things they miss as well. (18.04.2018)