Archaeologists have discovered a huge ceremonial skull rack in Mexico dating from the time of the Aztecs. The find could shed new light on how the empire’s rulers projected their power using human sacrifice. 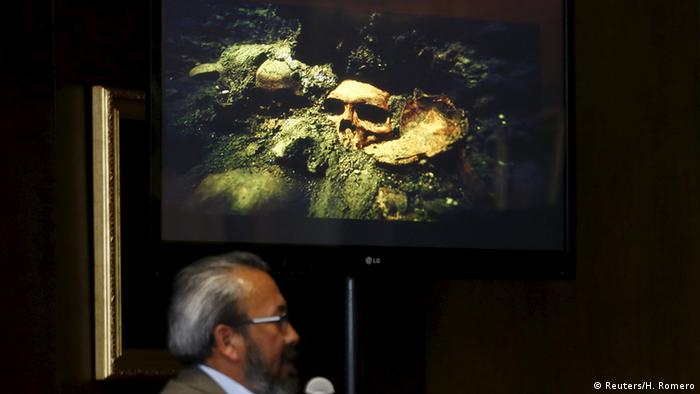 The human remains were found as archaeologists dug close to the large Aztec temple in the heart of the capital Mexico City.

The skull rack, known as tzompantli in the indigenous Nahuatl language, was a wall used to display the bleached white craniums of sacrificed warriors from rival kingdoms, scientists revealed Thursday.

The victims were likely killed by priests standing on the towering temples that once stood nearby, said researchers.

Eduardo Matos, an archaeologist at the National Institute of Anthropology and History, suggested the skull rack in Mexico City's central Zocalo square "was a show of might" by the Aztecs, who may have invited friends and enemies to be cowed by the gruesome display.

Dug up behind the capital's colonial-era cathedral, the as yet partially uncovered skull rack was likely built between 1485 and 1502, lead archeologist Raul Barrera said.

Hundreds of skulls would have been arranged neatly on the wooden poles of the racks which may have measured 112 feet long and 40 feet wide, and whose purpose was to inspire fear and awe, said the team.

Barrera said that one Spanish writer shortly after the conquest described mortared-together skulls, but none had been found before.

The 35 skulls that were seen on the wall were laid in a circle, looking inwards, which experts had not previously seen.

"The tzompantli had a very specific symbolism," Barrera said. "With more study, we expect to learn that many of these skulls belong to (Aztec) enemies, who were captured, sacrificed and decapitated in order to be displayed there."

The warlike and very religious Aztecs ruled a huge empire that at its height stretched from the Pacific Ocean to the Gulf of Mexico before the Spanish conquest of 1519-1521.