People filming and photographing accident scenes for social media are increasingly obstructing highway rescuers. And more and more drivers are neglecting the rules for getting out of the way of emergency vehicles. 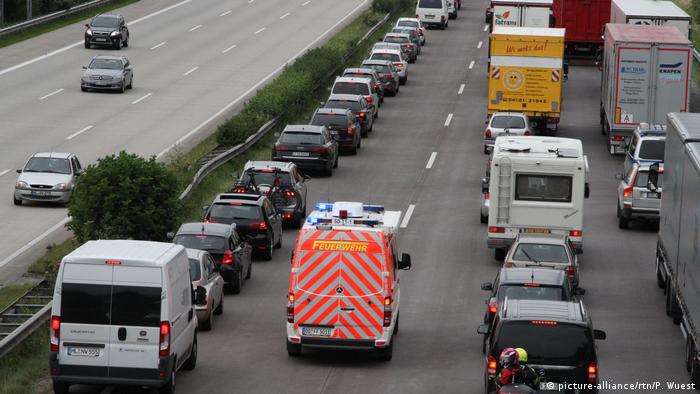 Among concepts so quintessentially German as to defy easy translation is the "Rettungsgasse," literally "rescue alley," the corridor that drivers free up in the middle of roads so that emergency vehicles can get to the scenes of accidents. Forming them is one of the first things Germans learn in driving school. But the practice is increasingly being neglected, and social-media rubberneckers are hindering authorities and rescue workers – with fatal results.

On Monday, a 23-year-old woman in Schweinfurt, Bavaria died in a car crash. Police had to leave the accident scene proper because people on the other side of the four-lane road stopped to photograph the crash. Police have brought charges against 13 individuals for hindering rescue efforts.

Regional police issued an emotional appeal to motorists to stop such practices.

"Please respect the dignity of the dead and injured!" the Lower Franconian police directorship wrote. "Desist from taking video footage and photos of accident scenes and disseminating them on social media. Notwithstanding the fact that you are distracting yourselves and could cause further accidents, you should think about the following. What if your family and friends were in the accident? How would you feel if you learned about the death of someone near to you from social media?" 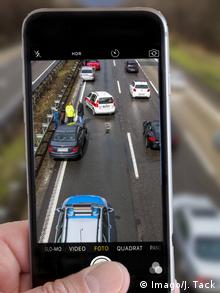 This is illegal in Germany

The accident in Schweinfurt was no isolated incident. Last Saturday, on the autobahn near Limburg, drivers failed to clear a path for fire department vehicles, and one motorist even verbally attacked the rescuers. The previous day, 20 people were charged with filming a crash and obstructing rescuers on a highway near Nuremberg.

And on July 2, 18 people died in a burning bus in Münchberg - firefighters had difficulty getting to the scene because motorists failed to get out of the way.

Are German drivers losing their sense of communal responsibility? Federal transportation ministry spokesman Sebastian Hille said in Berlin on Wednesday that although the ministry had no concrete statistics about people obstructing rescuers, the "subjective impression" was that the situation was getting worse because of the possibility of "taking photos with mobile phones and things like that."

That's an impression shared by the Bavarian Interior and Transportation Ministry.

"We don't have any concrete statistics because the emergency workers are more concerned with saving lives than making notes about who didn't get out of the way," ministry spokesman Michael Siefener told DW. "But fire department and emergency rescue workers are complaining more and more about people blocking their way to the scenes of accidents." 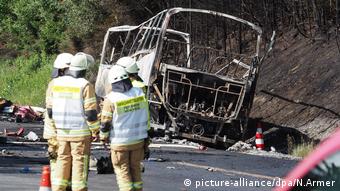 The Federal Transport Ministry underscores that rubbernecking and failure to clear the way for rescue vehicles are serious offenses.

"Every minute extra rescuers need to get to a site lessens the chance of [victims'] survival," Hille said. "Blocking a Rettungsgasse is not a misdemeanor."

Traditionally, the punishment for violations has been mild, and enforcement of the law lax. But that is now changing.

In response to the bus accident, Federal Transport Minister Alexander Dobrindt has drastically hiked the fines for not clearing the way for ambulances, fire trucks and police vehicles. Previously drivers were merely fined 20 euros ($23) for violations. Under new sanctions Dobrindt introduced in early July after the bus tragedy, violators face a minimum fine of 200 euros and will automatically receive points on their licenses.

In cases where people are endangered and official vehicles damaged, violators could have to pay 320 euros and would lose their licenses for a month. The new fines are currently being reviewed by the upper house of Germany's parliament, the Bundesrat. Meanwhile under stiffer laws introduced in May, social media rubberneckers who hinder rescuers from providing assistance could even receive jail sentences of up to a year. 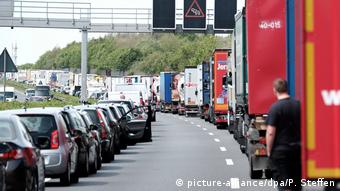 Open car doors can also be an obstacle

More will be done to enforce the law as well. Siefener said that Bavaria would commit police officers to ensuring that drivers obeyed the rules concerning clearing the way.

"Most of rubberneckers aren't conscious in such a situation that they're putting other drivers at risk and delaying rescuers," an ADAC spokeswoman told DW. "That's our understanding of the psychology."

On Thursday, the Bavarian Transport Ministry and the ADAC launched a joint public awareness campaign with measures including highway banners and mobile phone apps instructing drivers how and when to form a Rettungsgasse.

"Without it, police and emergency rescue vehicles can't get to the sites of accidents quickly enough, although often every second counts," said Bavarian Interior Minister Joachim Herrmann.

What foreign motorists need to know

The Federal Transport Ministry is particularly concerned that foreign drivers on Germany's highways know the correct procedure for letting emergency vehicles by.

On multi-lane roads and highways, drivers in the left-most lane should pull over to the left. Drivers in all other lanes are instructed to move right, thus opening up an "alley" for emergency vehicles to get through.

Drivers should begin to do this as soon as they encounter a traffic jam and are forced to slow down to a crawl - and not only once they hear sirens or see flashing lights. By then, it can be too late to get out of the way quickly. This is something most German drivers get wrong as well.

Once emergency vehicles have passed, drivers shouldn't try to speed behind them, using the ad hoc rescue lane. That's dangerous, and it's illegal to pass vehicles on the right on German roads. And taking amateur footage of accident scenes to post on social media is absolutely forbidden.