Officials in the German state of Lower Saxony have detected trace amounts of radioactive material in the nuclear waste storage site at Asse. The facility has come under fire in the past. 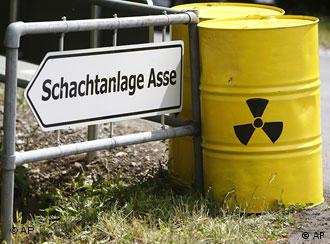 German safety officials are again looking into the storage of radioactive material in the German state of Lower Saxony after finding that there has been a seepage of nuclear waste in the former salt mine storage facilities in Asse II.

Traces of tritium and cesium 137 were found in the old salt mine shaft where the nuclear waste is stored some 950 meters (3,117 feet) below the ground, officials said.

Measures to contain the leak and protect Asse staff were being taken and the levels of contamination found were below acceptable limits, according to Germany's Federal Office for Radiation Protection.

In 2008, Gabriel claimed that Asse II was the most problematic nuclear storage facility in Europe. The site dates back to the Cold War era and holds nearly 126,000 barrels of low to medium level nuclear waste.

While officials have a rough idea of what is stored there, there is still some uncertainty as to the exact contents of the site, because when the facility was first established, there was no regulatory process in place for storing nuclear waste.

These revelations come on top of the recent closure of the Kruemmel nuclear power plant in Hamburg after a transformer short circuit caused the plant to be automatically shut down. Further investigation in Kruemmel has shown an important safety sensor was not installed at the plant.

A short circuit that led to an automatic shutdown at the Kruemmel nuclear power plant in northern Germany sparked a debate over who should oversee nuclear power operations and how tight regulation should be. (13.07.2009)