Austrian TV Chef Kills, Skins Rabbits as Life Lesson for Teens | News and current affairs from Germany and around the world | DW | 31.03.2009

A well-known Austrian TV chef killed and skinned rabbits in front of a group of children to show them how food ends up on the dinner table. 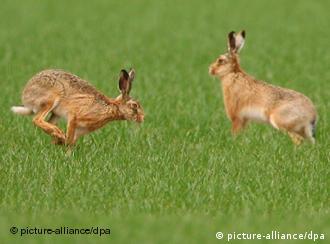 Sarah Wiener has said she likes to be provocative, but it seems that this time the star TV chef may have gone too far.

During the filming of a new series called "Sarah and the Kitchen Kid," Wiener decided to show her child sous-chefs the cooking process - from the very beginning.

In front of the children, aged 12 to 15, Wiener had several rabbits stunned and then killed before asking the youngsters were asked to skin the animals..

Wiener said that it was important for children to learn how their food ends up on the dinner table and to "create some reverence for the process."

But the five teenagers didn't seem too impressed with Wiener's life lesson.

Sidney, 15, said the worst bit was when the rabbit's throat was cut and blood came pouring out.

"It was a horrific sight," he said.

Pablo, 13, was also unenthusiastic and said, "It really hurt me to see this."

But it had also been interesting, he added. And none of the kids opted out of taking a helping of rabbit at the meal served later.

There are ways of honoring someone you admire, and then there are simply poor ideas. Two German discount food retailers have hit upon the latter by naming their new fried chicken product "Obama fingers." (10.03.2009)

A rose may be a rose, but butchers in Munich haven't been willing to extend Shakespeare's metaphor to their famous white sausages outside the Bavarian capital. But a German court didn't agree. (18.02.2009)

Rumor has it that the German diet consists entirely of meat and potatoes -- all washed down with beer, of course. While there is a grain of truth there, German cuisine is in fact quite diverse. (05.02.2009)

Alice Urbach's cookbook was a bestseller in the 1930s in German-speaking countries. A Jew, she fled her home under the Nazis, who republished the book under a different name without giving her credit.

It's estimated that more than 600,000 care workers are illegally employed in Germany. Almost all are from Eastern Europe; almost all are women. A proposed reform could massively improve their working conditions.