Self-professed historian David Irving has been released from prison in Austria after winning an appeal against a three-year prison sentence for denying the Holocaust. 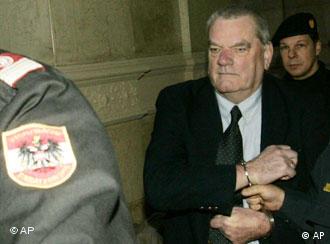 Irving is barred from entering several countries, including Germany

Austria originally issued an arrest warrant for Irving in 1989 after he denied the Nazi's murdered six million Jews in a series of lectures and interviews given in the country.

But it wasn't until Irving re-entered Austria 17 years later, in November 2005, that he was arrested for those crimes. In February 2006, the court sentenced Irving to three years in prison for denying the Holocaust.

On Wednesday, Vienna's Court of Appeal ruled that the 68-year-old Irving didn't need to serve the remainder of his term in prison, and has freed the British historian on probation.

"The fact that the offense was committed a long time ago, 17 years, was a mitigating circumstance," said Judge Ernest Maurer.

The defense had argued that the three-year sentence was too severe.

Prosecutor Marie-Luise Nittel told the court that Irving had received numerous letters from fans while he was in prison. She said he was "icon of the radical right-wing community" and a "dangerous criminal personality.

"His comments were a real mockery of all the victims of the Nazi regime," Nittel said. "The impact of such offenses shouldn't be underestimated." 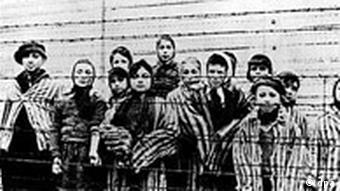 Irving denies that Auschwitz was a purpose-built extermination camp

The Jewish community in Vienna described the decision to free Irving as an "erroneous verdict.

"Coming on the heels of the Holocaust deniers' conference in Tehran, the verdict sends the wrong signal and ignores the principle of general prevention," the community said in a statement.

The director of the Simon Wiesenthal Center in Israel, Ephraim Zuroff, sharply criticized the verdict.

"Irving is, ideologically speaking, probably the most dangerous Holocaust denier of the present times," Zuroff told the Austrian Press Agency.

The State Prosecutor's Office in Vienna is currently investigating Irving for a similar crime of Holocaust denial. However, a spokesperson said the suspected crime wasn't enough to warrant holding Irving in prison.

Irving's lawyer said his client would leave the country immediately, and added he had advised Irving to give interviews to the press only after he had left Austrian soil.

Denying the Holocaust is a crime in Austria, as well as in a number of other European countries such as Germany and Switzerland.

A proposed conference that stirred ire in Germany earlier this year is now slated to take place next week. Iran is behind the meeting, which is expected to be a platform for Holocaust deniers. (06.12.2006)

An Austrian court on Monday sentenced right-wing British historian David Irving to three years in prison for denying the Holocaust. Earlier, he had acknowledged that the Auschwitz gas chambers had existed. (20.02.2006)