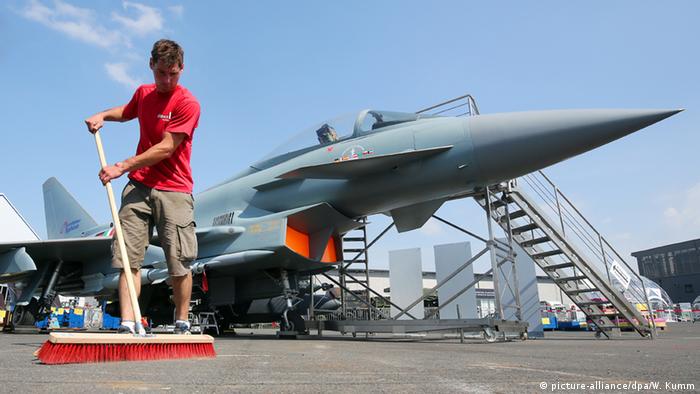 Austrian defense minister Hans Peter Doskozil told a news conference in Vienna on Thursday that an investigation had found evidence that Airbus and Eurofighter had misled Austria "with fraudulent intent" about the purchase price, the deliverability and the equipment of the jets.

Germany's Defense Ministry has announced it will freeze deliveries of its combat aircraft after discovering a technical problem. It's not the first time the fleet has been plagued with delays. (13.10.2015)

In 2003, Austria bought 15 fighter jets worth about two billion euros ($2.12 billion) from Airbus, with the Austrian defense minister now claiming the purchase had incurred damages for Austria amounting to 1.1 billion euros.

According to the ministry's finding, Airbus and the consortium illegally charged nearly 10 percent of the purchase price for so-called offset deals. Offset deals involve work being given to local companies. Normally they are part of the agreement, but their cost must be reported separately, which, however, wasn't the case here, the report said.

Airbus said on Thursday it was unable to comment as it had only just learnt about the action through the media. "We don't know any details," a spokesman said. "We can however confirm that in recent years we have supported the activities by the legal authorities, for instance through (our) own investigations," he added.

The Austrian Press Agency reported that the probe had found that Airbus had falsely inflated prices during the transaction. Prosecutors in Vienna and Munich were also investigating whether officials were paid millions of euros through advisory firms to secure the contract.

The initial decision to complete the deal had been struck in the year 2000, when the country's far-right entered a coalition government with the conservative People's Party.

Not long after the deal was clinched, however, allegations began circulating that politicians and others involved in the deal were receiving kickbacks. A probe was set up in 2007 to look into possible bribes, but came to no concrete conclusion.

Five years later, Austrian and German authorities launched a fresh corruption inquiry. Prosecutors in Munich are set to finish their preliminary proceedings later this year, according to AFP.

Prosecutors have said they no longer plan to pursue fraud allegations related to the acquisition of Eurofighter jets. The counsel criticized that the ruling runs counter to decisions by German and US legal authorities.