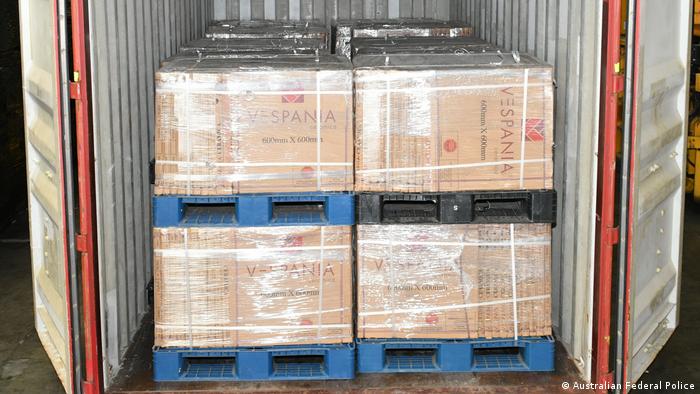 Authorities in Australia announced on Saturday that they seized the largest heroin shipment ever detected in the country.

Nearly 450 kilograms of the illegal drug was intercepted inside a container of tiles sent from Malaysia to Melbourne, authorities said.

A Malaysian National has been arrested after a joint operation by the Australian Federal Police (AFP) and the Australian Border Force (ABF), a joint statement by the two agencies said.

The man was charged on Thursday with import and attempted possession of a commercial quantity of a border controlled drug.

He appeared in the Melbourne Magistrates Court on Friday, where he was remanded in custody. He is due to appear again in court in January 2022.

The shipment arrived at the Port of Melbourne — Australia's largest port for containerized and general cargo —  in a sea freight container of ceramic tiles on September 29.

Investigators from the AFP then examined a total of 1290 packages containing heroin in the container, addressed to a business in Melbourne.

The 450 kilograms of the illicit drug caught in the bust have an estimated street value of 140 million Australian dollars (almost $104 million, over €89 million) and account for "the largest heroin shipment ever detected in Australia," the statement said.

The AFP said that it is working closely with its international partners to combat drug trafficking.

"We have a strong relationship with the Royal Malaysia Police (RMP) and in particular the RMP Narcotics Criminal Investigation Department," the statement quoted AFP Acting Assistant Commissioner Southern Command Krissy Barrett as saying.

"We continue to work together in identifying and disrupting transnational organised crime syndicates that seek to harm both our nations and generate millions of dollars of profits from criminal activity," she added.