Australia Apologises to the Aborigines

A significant moment in Australian history took place on Wednesday with the opening of the Australian parliament. As the first item of business in the new parliament, Australian Premier Kevin Rudd gave a formal apology to the "Stolen Generations" of Australian Aboriginals. 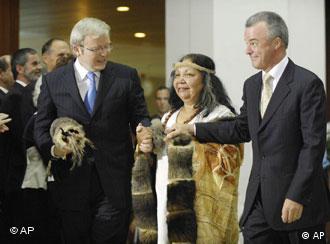 The "Stolen generations" include several thousands of young aboriginal children, who were forcibly taken from their parents and sent to internment camps or orphanages, where they were taught to assimilate into white society.

In many cases, they never got to see their parents again. This practice, which has devastated the lives of many Australian indigenous people continued into the 1970s.

Members of aboriginal reconciliation groups welcomed the latest initiative. Fred Chaney said: "This is a turning point, a point at which we can all move forward together."

The Australian Human Rights Commission officially raised the issue of the “Stolen Generations” in 1997, asking for reparations and an apology on moral grounds.

However, the previous government under Prime Minister John Howard steadfastly refused to give such a formal apology. “Australians of this generation should not be required to accept guilt and blame for past actions and policies over which they had no control," Howard insisted.

The issue of the “Stolen Generations” was given much airing in the media. It was feared that an apology would open the floodgates to compensation claims against the Commonwealth government.

So far, the new Rudd Labour government has ruled out financial compensation to the stolen generations despite calls from indigenous groups and politicians.

"There has to be reparations, there has to be compensation, and the fact that Mr Rudd has said "no" to it, doesn't mean that that will be the outcome,” said the Australian Greens Senator Bob Brown.

Australia's parliament was opened for the first time ever on Wednesday with a traditional indigenous "Welcome to Country" ceremony.

Many Australians see the formal government apology as a positive step in the direction of harmonious race relations in this country and several of Australia's indigenous people came to the capital city, Canberra, to witness the historic occasion.

The prime minister ended his speech in the House of Representatives to great applause with a call for new beginnings: "Let us resolve to make this day, the day when we began a new chapter in the nation's story, written together by each and every one of us, Australians, one and all, I thank you."
Advertisement